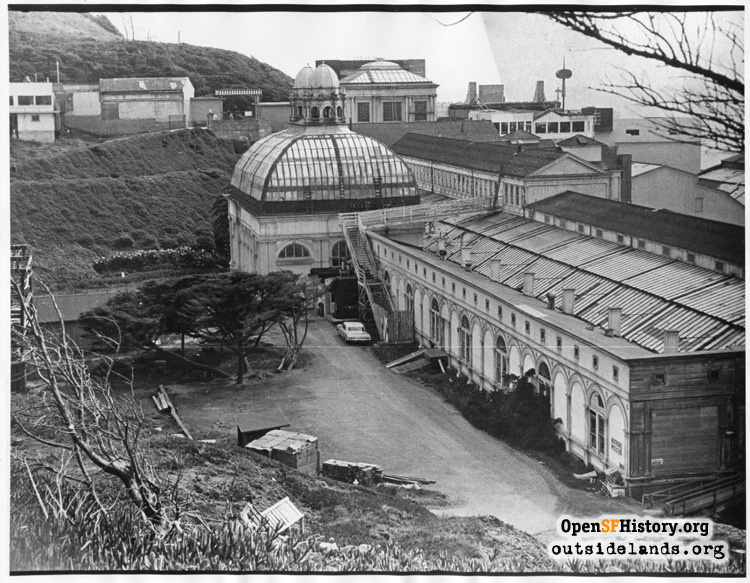 A study in decline and teenage exploration of San Francisco's Sutro Baths.

by Emiliano Echeverria
May 2014 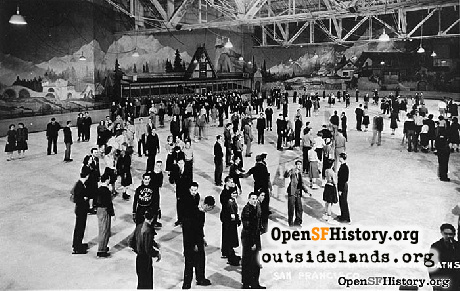 I never visited Sutro Baths, but I knew "Sutros" well. Let me clarify: By the time I first encountered Sutros the pools were already closed, so I don't remember them as they were when they were open.

I must have been about five or six, and I was first impressed by the fact that it was big and cold (after all, it was an ice rink, no longer a "Tropic Beach.") My first impressions, after coming down the stairs to the grand promenade, were the big roof arches, the glass roof and walls (what remained) and the thousands of seats. Another thing that struck me was the palm tree growing through a floor near the Grand Staircase. This place was interesting.

Fast forward to about 1961, and I'm a curious pre-teen, already used to exploring the city. That year I drifted to what was then known as the "Cliff House Complex," which was right up the street from Playland. And that was when I first explored Sutros. Now, at that age I confined myself to the public areas, which were many and ample. I got well acquainted with the ice rink, the promenade, the Musee Mecanique, the Prison Exhibit, the Museum, and all the odd dead ends created by the division of the building. I even saw the fabled unlocked doors that led to the baths, but didn't try them yet.

Junior High, when the sap flows in young boys and their curiosity rivals that of a cat. By this time I and my brother, and later my friends, were exploring every available inch of what is now called the Sutro District of the Golden Gate National Recreation Area (GGNRA). But Sutros' abandoned areas had been off-limits in my mind until now. Now came the time to explore. I had two friends at that time who shared my interest in that area: John and Bob (not their real names, they know who they are and that will do!) John and Bob were "ne'r-do-wells," who combined a streak of juvenile delinquency with the sensitive historian, as did I. 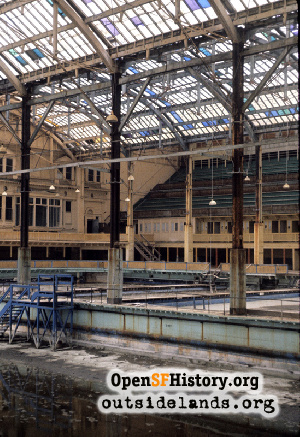 Sutro Baths interior circa 1966 after closing - Photo by Dick Clark

One May day in 1965, we were enjoying the view from inside the little pill box on Sutro Heights (yes it was "open" then), when we decided to enter Sutros—and not by the front door.

We knew there was an old military road that had been built for wartime Battery Point Lobos, that entered the Sutros' property above the far terminal of the Sky Tram. (That road is a trail today.) We also knew that the Whitney people didn't have a person there to make sure that everybody got back on the tram, or even if anybody arrived other than by the tram, which was a no-no. So arriving on the far side of the tram's run was a cinch. The fence at the property line was badly rusted and like Swiss cheese when it came to inquisitive boys...

A lot has been said of the vandalism that Sutros closed sections suffered post-1954, and that could be seen, but to me most of the damage was by the elements (except for the glass windows!) Graffiti was not in abundance, and remember, they had guards.

We were not there to damage, nor steal, just look in awe at the immensity of the now-closed baths, and how they completed the rest of the building, and to explore as much as we could before a guard spotted us (they never did). Now for the first time it began to make sense: the why's and where's. We went along the western wall and entered the area under the ice rink. We could hear the blades of the skaters above us. We made major efforts to be quiet, inconspicuous, and "blend-in" a tactic that worked, every time, right to the end.

We worked our way to the bottom of the Grand Staircase, but since we were under the rink, we could not access the site of the cold-water plunge, as the area under the rink was walled off. So we hit a dead end. Time to go before the guards find us. So out we went and disappeared into the Sky Tram crowd and, at the right moment, scampered back the way we came, discreetly... 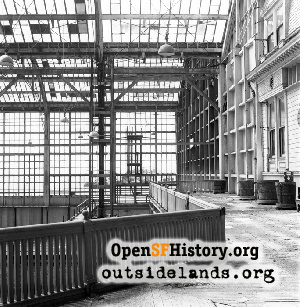 Cliff Tune shot this picture in 1960 of the backstage portions Sutros which were closed to the public., 1960 - Photo by Cliff Tune 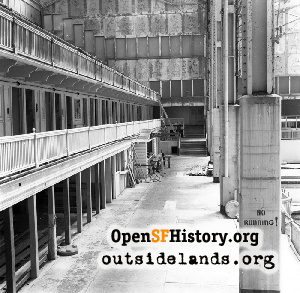 Cliff Tune shot this picture in 1960 of the backstage portions Sutros which were closed to the public., 1960 - Photo by Cliff Tune

A couple of months later finds "the kids" back at Sutros. First, we pay to go in. John has been there since we all went together so he had gained a few "insights." We entered separately (separated by about five minutes or so. "PSST! Meet at Musee Mecanique." We saw each other and each of us played with a few nickelodeons and quietly, separately went to the baths through the assigned door, at the bottom, almost directly below the entrance to the Musee. Once inside the baths, it was too easy to be seen, so we quietly snuck into the dressing room areas under the bleachers. We explored the dressing room areas under the northern bleachers and the Musee. As we quietly wandered the area we also found our way into long unused storage areas near the powerhouse/ laundry building. That building (the little Victorian building that was built first) seemed almost abandoned. It looked like nothing in there had been used in years: everything that could, had rusted. Well, it was getting time to go so we snuck out the old Sky Tram route we had used previously.

What we did see in those storerooms were a lot of decor for the baths and rink that had been replaced, and some that had never been used. The maze that was the dressing rooms was quite impressive and I could see how it was easy to get lost if one was easily disoriented. Still, we never vandalized and took nothing. How I wish I could have taken photos then.

Time begins to run out

My serious explorations of the non-public areas of Sutros began in May 1965. Ten months later it closed forever. We went in about three weeks after it closed. We explored previously seen areas, but we wanted to explore the area under the south bleachers, inaccessible while the building was open.

As it turned out, many previously locked doors were wide open: all the "goodies" were gone: the exhibits, the Tucker, all of it. But aside from the dressing rooms there were more storage rooms along the south side of the baths. We took some street car ads. All the large older posters that were left had been torn and otherwise ruined. The car cards were in the best shape, so we all took a few. (I now have all of these) then we left.

Memorial Day, 1966, came and went. Sutros was still up. How much longer? We all had hoped they wouldn't start until after school was out! I had also secretly hoped that they would see fit to preserve some part of the building, like its handsome double domes above the grand staircase. Ah, hope springs eternal in kids.

The beginning of, and, the end

On the Tuesday night evening news there it was: the dreaded moment had arrived—they pulled down the double domes and those beautiful old domes broke into a thousand pieces as they hit the ground.

That did it. Time to play hooky - It's the last week of school, no more lessons and no time to waste. I wanted stuff and I was kicking myself for not taking more. Now, how am I going to get in now? John and Bob were on the same wavelength, so off we diverged from school with duffel bags in hand. In one bag were hand tools: a small crowbar, a hammer, and a couple of screwdrivers. Over the next ten days, we entered the demolition-in-progress Sutros five times. We got colored glass, tickets of various kinds, more car cards, some cancelled checks, and a couple of ledgers. And an Underwood Standard composition typewriter. (I have no idea what John did with that thing, but he wanted it.)

It is interesting to note that John, Bob, and I were not alone. In the entry portion of the building (the "Greek Temple") the colored glass windows were (legally) being removed for a restaurant (I never found out where). Every time we entered the poster and other storage areas, more had been removed. Two days before the fire I was in that room, and it had been pretty well picked over, and a mess with ripped poster remains all over the pace and old tickets all over the floors. Apparently, two days after my visit, that Sunday, the fire was started in that same room... Creepy!

By the time of my last visit, much of the bleachers were gone, although the arched roofs were barely touched yet. Most of the places worth seeing in what remained were splinters, and there was by that time nothing left to take. It was time to go and not return. But we did, and when we had barely entered the area of the Sky Tram, we noticed something was not right and we left. We then turned back to see what someone stupidly had done and counted our blessings.

And then the place burned.

As it turned out the place burned in one of San Francisco's most memorable fires—in a city with a notoriously combustible history, at that. The following morning, the chilly sun shines on desolation, and I go to see what's left. Pretty much nothing. 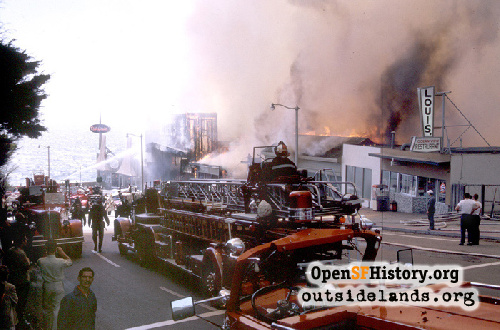 Now who could have guessed?

And now the ruins are a tourist attraction in their own right, visited by thousands annually: who would have known? Later in 1966 and 1967, I went and explored the ruins, caves, and catch basins and walked through their tunnels too. I took pictures of that and have them still. I have returned from time to time since, even recently. But how can I tell people when I walk that cove north of the Cliff House that my mind wanders back to a wooden wonderland: a Victorian jewel, though faded from past glories. How can I tell them when I walk the terraced hill that I'm walking in a dressing room corridor? Or descending the Grand Staircase on the side of a cliff? Or watching swimmers' ghosts in the submerged pools among the algae?

Today tourists from many lands come here to ponder the ruins from the past.