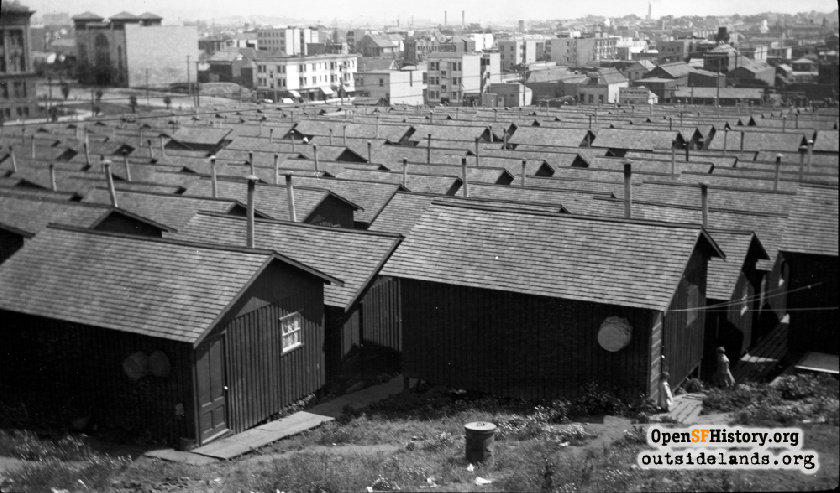 Refugee Cottages built after the 1906 Earthquake and Fire.

My great-grandparents met in the confusion and bewilderment of a refugee camp formed to aid the San Franciscans left homeless by the 1906 Earthquake and Fire. The couple quickly fell in love and by November they married. 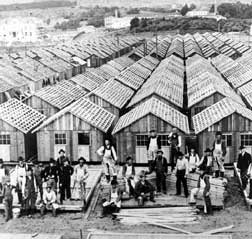 Despite meeting in the same condition---bedraggled, dislocated, and facing an uncertain future---the two families had their differences. For years, my snobby great aunt disparagingly noted that her new sister-in-law's family was one of the last to leave the camps.

But being one of the last had its advantages. When refugees departed their temporary home in Camp Richmond (now the freeway and parkland strip that is Park Presidio Boulevard) many carted away a new home.

The San Francisco Relief Corporation had built row upon row of "refugee shacks" in camps from September 1906 into early 1907. These small cabins, just 10' by 14' in some cases, were meant to replace the camp tents before winter set in. Designed by San Francisco Park Superintendent John McLaren (who insisted they all be painted a park-bench green), the Department of Lands and Buildings of the San Francisco Relief Corporation, and the US Army, the shacks were constructed by union carpenters. Each home had California redwood walls, fir floors, and cedar-shingled roofs.

As the camps began to close down in the late summer of 1907, the Relief Corporation sold off the shacks to departing families for $100 or less. Charities even provided free hauling for those who needed it. San Franciscans carted away over 5,000 cabins to empty lots in the city to use as starter homes. Usually two or three were joined together to create a larger residence, and many owners dropped their new domiciles onto the sand hills of the Richmond and Sunset districts.

Of the thousands of shacks taken from camps only a handful are certified to be left standing in San Francisco. In the Sunset district you can find seven at two sites and one is San Francisco City Landmark number 171. At 1227 24th Avenue stand three refugee shacks joined together by the real estate developer Sol Getz. Today the home looks in great shape: fresh paint, surrounded by flowers, a country cottage in a big city. Jane Cryan lived here in the early 1980s, and when she discovered that the odd, tiny, run-down home she rented was linked to San Francisco's best known event, she began an exhausting battle to save these "hope chests".

Jane researched their history and surveyed the city for survivors. She lobbied politicians and influential members of society to save the few left. She attempted to educate property owners on the treasures they typically saw as eyesores. She won in some notable cases. San Francisco declared her beat-up red shack a city landmark. Two cottages at 34th Avenue and Geary were accepted by the US Army and saved from demolition. The Army moved them into the Presidio where they sit, restored to their 1906 state.

The advocacy group Jane founded, The Society for the Preservation and Appreciation of San Francisco's Refugee Shacks, also lost its share. Four shacks were destroyed in the Richmond after the owner insisted his buildings were actually built in the 1930s. His assertion was refuted by the 1907 newspapers that fluttered to the ground in the bulldozer's wake.

Bring in the 3-Car Garage 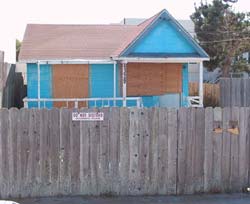 Another loss stares us all in the face. Four shacks, including three rare "Type A"s, are facing demolition on Kirkham Street near the beach. In a way it's surprising they've lasted as long as they have. The shacks, cobbled together to form two separate residences on one lot, have been in terrible shape for years. The paint is peeled, the roofs are rotting, and now they stand vacant with windows boarded. The back cottage didn't even have heat and was reportedly condemned in the early 1970s, but held on to provide a home to renters for 30 additional years.

My friend Diane plays Devil's Advocate with me and asks "How many examples of these shacks does the city need?" The former tenant of the back cottage tells me "there's no bad guy in this story; it's just time for them to go." The Berkeley architect hired to submit the plans for demolition admits he has no knowledge of the historical background of the cottages and doesn't even know who owns them ("I'm working through another representative"); but in reference to a Planning Department letter about the possible historic importance of the shacks, he gave his general opinion:

"I have had dealings with Landmarks Commissions before and I find that they tend to put all things ahead of anything else in the world. If you can get on the National Register that's the most important thing in the world and it doesn't matter what happens to anybody else. And I wouldn't be surprised if it wasn't very similar in this case."

Actually, I don't put these shacks ahead of everything else. I really can see the viewpoint of the two brothers who inherited the property from their mother last year. How can two tiny, dilapidated sheds in San Francisco be anything less than an albatross around an owner's neck? No one looking for an investment would buy the lot if the cottages had to stay.

But I keep getting this wrenching tug in my stomach as the eccentric little bungalows and cottages near the beach continue to succumb to huge characterless structures. The funky artists, the surfers, the older hippie couples, and middle-class families are being squeezed out little by little. This is land where enterprising squatters and ingenious homesteaders once made abandoned cable cars into homes. I wonder how long the legacy of "Carville" will survive out here?

Everyone is saddened, but resigned it seems. Neighbors, architects, and preservation groups are prepared for the shacks to disappear. Even Jane Cryan sees it as inevitable:

"It's a terrible loss, but I don't think there's any hope of preventing demolition because of the condition." She admits, however, that her old home on 24th Avenue---the city landmark---once looked as bad as the Kirkham Street houses.

"You know these little guys are just so sturdy."


Read the latest about the Kirkham Street cottages.