In search of the streetcar houses 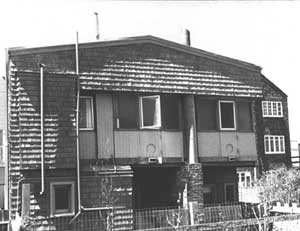 I've been, in a way, retracing the steps of the late James L. Heisterkamp. I walk up and down the blocks of the outer Sunset district. looking for Carville homes that might still exist. I think they're out here. What about the narrow box that is 1218 46th Avenue? I inspect the seam that splits the two stories of a Kirkham street home near 48th Avenue: a couple of cable cars stacked up?

A San Francisco State student creating a special study report, James L. Heisterkamp kept a detailed diary of his 1994 search for Carville's "last remnant". He chatted with people in libraries, people on walks, people he met in cafés and laundromats. He knew from Natalie Jahraus Cowan's California History article (Winter 1978/79, Vol. LVII) that 1415-47th Avenue used to be a Carville home, but the owner, Frank Lemus, told him there wasn't any sign of streetcars left inside. When he headed to the beach and turned onto Great Highway he met a kid about twenty pushing a bicycle out of a suspiciously narrow house. Mr. Heisterkamp asked whether it had once been a cable car. The young man didn't know, but gestured to the home next door, which was for sale.

The bicyclist pointed Heisterkamp to the last, best Carville home left. And the researcher knew it was a lucky break. Other locals he met had never heard of Carville. "During my trekking up and down 47th, 48th, and the Great Highway, looking for the elusive remnant Carville cable cars, I was amazed by the number of people who never heard of the previous history of their own neighborhood. One man, in his forties or fifties, lived in the area about a half a block from the [Carville] address, for over 20 years and was unaware of cable cars ever being a part of some of the structure in his area."

During an open house, Heisterkamp had the opportunity to take photos and chat with the owner. The old railcars made up the second floor, with the front door opening on a large room of two cable cars side by side, their interior sides removed. The property was on the market for $309,000. (By January 1995, the price was $299,950.) 1

Enter Scott Anderson, a filmmaker who lived in an apartment in the neighborhood. Anderson walked by the home one day, saw the "for sale" sign, and took a look inside. Stunned and entranced, he ended up buying the quirky structure.

Pat Halloran, Anderson's tenant, gives me the great privilege to walk around inside his home. 2 Like James Heisterkamp and Scott Anderson before me, I marvel at the amount of original, historical fabric in the home. One wall has the wooden benches of the old cable car still built in. I sit where passengers in the 1890s sat, under the original tongue-and-groove slat ceiling, peering out side windows. Glass lanterns, old kerosene lamps, hang over the space, and it doesn't take much to believe the room is about to rumble down a pair of rails. Pat's bedroom and bathroom is an intact horse car, complete with a sliding panel door separating the two.

"I'm trying to do the best I can to keep it in the state it is," Anderson tells me on the phone. Preservation and restoration is a tricky business. Obviously the aluminum windows in the back aren't original to the streetcars, but does he replace them with window frames from the structure's time as rolling stock or its incarnation as a residence? Should we look at the house on Great Highway as a collection of transportation artifacts cobbled together, or a single architectural landmark?

For now, Anderson tells his tenant, Pat Halloran, not to put any new nails in the walls. More thought and research needs to be done.

I'm so smitten with the place I ask Halloran if he has plans of moving anytime soon. He says, "If I ever leave, I'm going to really miss it." But surprisingly, he doesn't mention the special architectural elements of his apartment, but its location, echoing with a modern twist the sentiments of the Carville residents from a hundred years ago: "Being near the beach, especially on a day like today, when I can just take off boogie boarding in the waves... it's great."

Homeowner Anderson tells me something else: "I'm very interested in preserving the house and the property in this area of the Sunset, because there's some great buildings out here." 3

It's a nice sentiment to hear, because it isn't hard to find opposing views of the district. Map makers labeled the area the "Great Sand Waste" in the 1860s. In 1999, Preservation magazine did an article on the Carville house which featured lines such as "...the Sunset may be [San Francisco's] only neighborhood without a trace of apparent charm or history, a vast, drab tract of stucco houses sloping down to the sea." 4

Walking down Great Highway, you can't tell Scott Anderson's house has a wonderful secret inside it. Apparently the Sunset district as a whole has the same quality.

Think you know of a Carville house? Let us know!

Notes:
1. James L. Heisterkamp, "Scrapbook, Olden San Francisco, Carville and its Last Remnant", a Humanities 699 Special Study, 1996. Subsequently, Heisterkamp found building permit records that indicated a Mrs. Collins had the cars put on a frame in 1908, and the likely date they were raised to create a two-storey structure was 1921. Mrs. Collins was interviewed and the house profiled on April 8, 1947 in The San Francisco News, page 13.

2. At Scott Anderson's request, we've withheld the exact address of the Great Highway house. From the street, no one would be able to tell it's made of streetcars.

Special thanks to the descendants of James L. Heisterkamp and the San Francisco History Center for their assistance.