Streetwise: Parkside and the Graft Trials

Parkside and the Graft Trials 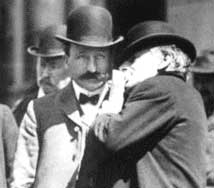 The well-chronicled postscript to San Francisco's devastation in the 1906 Earthquake and Fire is the revealed municipal graft, and the resulting legal prosecution of the city's administration. Coinciding with the physical rebuilding of a great metropolis came the downfall of the city's "boss," Abraham Ruef. Using the Union Labor Party as his vehicle, Ruef orchestrated the election of Eugene Schmitz as mayor in 1901, and not only won Schmitz reelection in 1905, but control of the board of supervisors as well.

Once in power (despite holding no office himself), the dapper attorney secured bribes for himself, the mayor, and the board of supervisors to conduct any major business in San Francisco. Gas companies, boxing promoters, bars, railroads, contractors and telephone corporations all ended up paying Ruef tens of thousands of dollars for "consultative services."

While most of western San Francisco, being practically uninhabited, got through the temblor and conflagration unscathed, the future Parkside District played a major role in unsettling Schmitz and Ruef from their corrupt thrones.

For Need of a Trolley...

In early 1905, William H. Crocker (son of one of the "Big Four" millionaires) headed a collective of investors who quietly bought up, lot by lot, over four hundred acres of sand dunes south of Golden Gate Park. The promoters formed the Parkside Realty Company in July with a million dollars of capital stock, and foresaw four to five million dollars profit in developing the land for homes.

The San Francisco Chronicle, however, pointed out one major hurdle: "An electric railway is also to be constructed, although under what auspices or by what route is not yet determined..."1 Why was this important? Walton Bean, in his terrific book, Boss Ruef's San Francisco, explained:

"A street car line was vital to the Parkside scheme because the automobile was still a luxury of the rich, and the promoters planned to sell their $5,000 twenty-five foot lots to lower income families."2

Crocker and Green settled on a plan to build a trolley line running south on 20th Avenue. Future residents could transfer to the existing United Railroads line beside Golden Gate Park to get to work downtown. But building a new rail line would need the permission of the City of San Francisco.

The Way of the World

William Crocker first approached Mayor Schmitz for his approval of the Parkside project. The mayor, without consulting Ruef, gave Crocker enough assurance of the supervisors' favor that the company started the work on laying streets, sewers, and utilities. When the Parkside Realty Company formally presented their application for a trolley franchise to the board of supervisors, Mayor Schmitz informed the corrupt body of the great profit of such a project. The supervisors assumed they would receive an ample payoff.

J.E. Green, President of the Parkside Realty Company, attempted to grease the wheels by taking the supervisors and mayor on a tour of the tract, then off to a restaurant for lunch, speeches, and liberal amounts of wine. At this luncheon, Supervisor Charles Boxton made a florid address to the entire assemblage that included the bold question: "How much money is in it for us?"

Green saw the way things worked and subsequently used realtor Gus H. Umbsen as a conduit to doing "business" with man who controlled the supervisors and mayor, Abraham Ruef. Umbsen's company had exclusive rights to sell the Parkside lots (at a 10% commission), and had previously used Ruef as his personal attorney.

Over a couple of meetings a deal was struck. The Parkside Realty Company would "employ" Ruef as an attorney for two years and pay him $30,000.

Just a month after the Earthquake, when the Parkside directors were particularly anxious to take advantage of the huge number of displaced residents seeking new homes, Umbsen paid half of the fee, in cash, to Ruef. The company recorded the payment not as a legal fee, but gave Umbsen the cash as a payment for lots sold (and later deeded back).

Abe Ruef planned to share this boodle with the Supervisors, each to receive around $750, but the pay-off never went beyond Ruef as he became distracted with a larger issue.

For years the San Francisco Bulletin, led by editor Fremont Older, worked to expose the open secret of the Union Labor Party's corrupt system and to prosecute Boss Ruef. Almost every edition of the Bulletin featured barbed cartoons, accusations, intimations of graft, and calls for grand jury indictments.

In the ashes of the 1906 fire, when Older saw the rebuilding of San Francisco as a particularly prosperous opportunity for Ruef and his men, he finally convinced millionaire Rudolph Spreckels to fund a large-scale investigation. Spreckels was a firm believer in clean government and his money brought in detective William J. Burns and special prosecutor Francis J. Heney, both of whom had to be released from other duties by President Theodore Roosevelt.

When Older convinced a superior court judge to impanel a grand jury free from Ruef's influence, and got District Attorney William H. Langdon's consent to take on the administration, the graft prosecution began in earnest. The deal to grease the wheels for the Parkside rail line was one of the first scandals uncovered and focused on by the legal team.

The various trials that removed the mayor and supervisors from office and put Ruef into San Quentin prison spread over five years. The Parkside officers agreed to testify against Ruef in exchange for receiving immunity, but because of that, a number of jurors apparently felt the officers' culpability made them questionable witnesses. The jury deadlocked 6 to 6 (with Heney suspecting fixing) and it was left to a different railroad extortion case to put Ruef in jail.

Despite the admitted bribery by the Parkside Realty Company, the new reform board of supervisors granted the trolley line franchise (without cash favors) in October of 1907. By the following July streetcars ran along 20th Avenue south from Golden Gate Park.

Despite all the grand plans, the development sold sluggishly through the early 1910s and the Parkside as we know it today didn't fill in until almost World War II.

2. Walton Bean, Boss Ruef's San Francisco; the story of the Union Labor Party, big business, and the graft prosecution, Berkeley, University of California Press, 1952. Most of the facts for this article come from Mr. Bean's book.