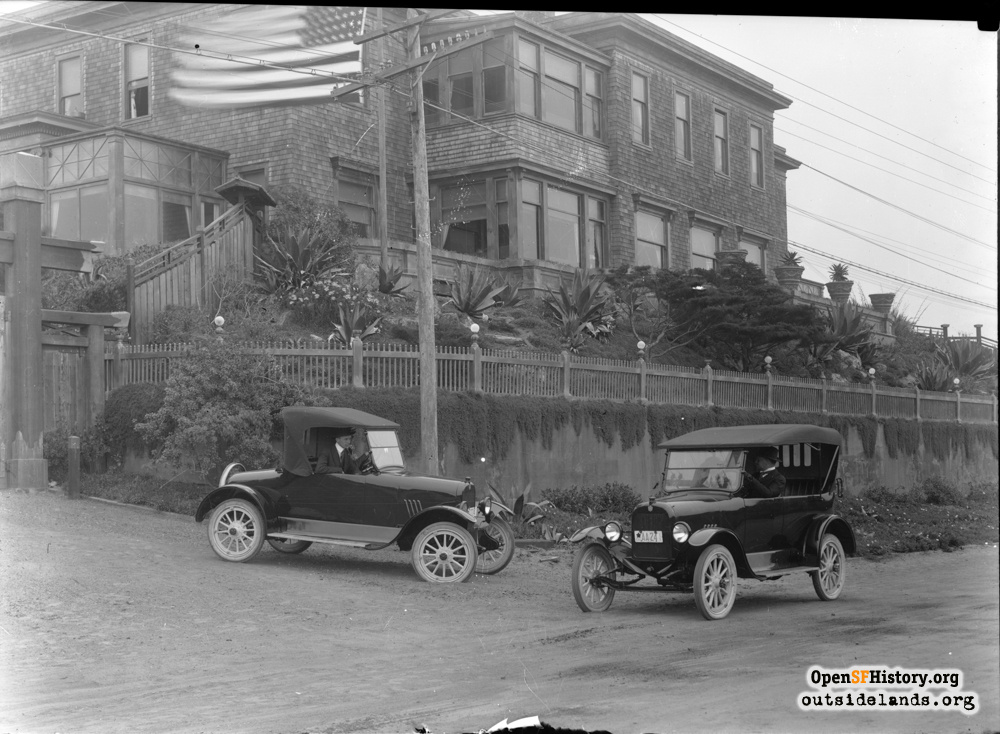 The long-gone beach resort that began life as the Oceanside House.

Tait's at the Beach: The House of Mystery 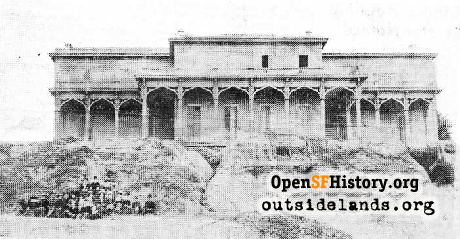 The block of the Great Highway between Ulloa and Vicente streets does not look like a locale of legend and mystery. The humble homes erected here face the Pacific Ocean in a row, and many of the owners have built vertical extensions to better capture the surf and sunset view.

This same view was once taken in by presidents, celebrities, and an extraordinary couple that introduced Zen Buddhism to America. From the 1850s to 1940, one building on this block acted as roadhouse, exotic residence, and famous San Francisco restaurant known as "Tait's at the Beach."

The legend starts with an attorney named Bela Brooks who owned this part of the shoreline in the 1850s. As the story goes, a luxurious steamer ship wrecked nearby and the lawyer salvaged the materials and sumptuous furnishings to build a roadhouse eventually called "Brooks Folly." An old-timer in 1928 described it as "imposing---magnificent, but somehow somber, for it was the only house for miles." Brooks closed the place in the late 1860s and the square-shouldered edifice stood abandoned for years. Passersby spread rumors of suicides, murders, and other lurid deeds inside the vandalized, boarded-up house. 1

Other wealthy if socially questionable owners opened and closed the place through the late 1800s. During this time the hotel/bar/restaurant was generally called the "Oceanside House," and long after it returned to being a private residence San Francisco directories continued to call it such.

Ironically, it is when the history of the building moves into the harder realm of fact, that it gains the nickname "House of Mystery."

Alexander and Ida Russell, a wealthy and well-traveled couple, bought the property at the turn of the twentieth century. With business interests in real estate, mining, and the rubber industry, Alexander Russell acted the part of a typical civic-minded businessman. He served as president of the local booster club and in the name of improvement, worked to eliminate much of the ramshackle and odd housing at the beach—including the horse and cable cars that had been recycled into homes and clubhouses in "Carville." 2 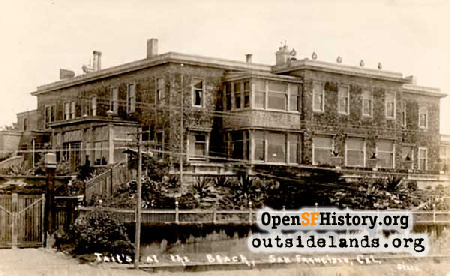 For the times the Russells possessed very open-minded and eclectic spiritual beliefs. Ida delved into the study of comparative religion, hosting Sunday morning lectures on Brahmanism, Confucianism, and other Eastern theologies. She told a reporter that she "studied all religions, taking what I think is best from each." In 1905 the Russells hosted Zen master Soyen Shaku from Japan for nine months. The entire household, including servants, gave up meat, wine, and smoking, and meditated three times a day. Ida became the first American to begin koan study, something the Japanese Zen establishment had considered impossible for a foreigner. 3

The Russells created a magnificent Japanese garden and erected a high wall to protect it from the shifting sands. That fence, along with the Russells' unconventional interests, got people talking. Ida attempted to dispel some of the rumors of secret cults. 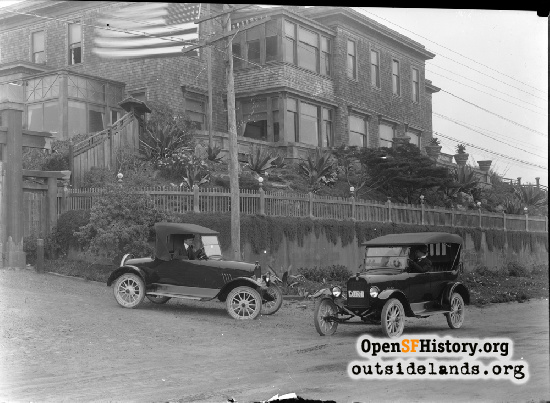 "There is nothing new or original in what we're trying to do," she said. "Though we live quietly, we're still vitally interested in the joys and sorrows of the world and our home is always open to neighbors and friends." 4

Unfortunately, Ida's unusual death only kept the "house of mystery" talk going. On September 20, 1917, she underwent a bizarre beauty treatment to remove wrinkles from her throat. The beautician applied a solution that included carbolic acid. The combination of the acid and a physician's morphine injection (for pain relief) ended the life of the robust 52-year-old woman. 5

In 1919, when Russell sold his home to restaurateur John Tait, a new golden era began for the old Oceanside House. The elegant and colorful furnishings the Russells left behind created a lively setting for "Tait's at the Beach."

Throughout the 1920s, great food, music, and Tait's unique atmosphere made it, in the words of writer Millie Robbins, "THE place to go for socialites and celebrities and those who enjoyed mingling with same." 6

Heads of state (including two presidents), boxers, actors, musicians, and regular folk of all sorts enjoyed the dark-paneled rooms, fine art, and warm fireplaces. Although Prohibition was in effect, Tait's had a well-known reputation as a place one might find an alcoholic drink or two. 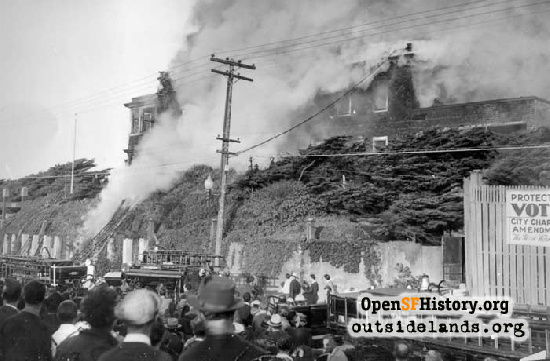 What Prohibition made difficult, the Great Depression made impossible for John Tait. In 1931 he closed shop. Others tried to get the place going again as the "Edgewater Beach Club," but it wasn't long before the police closed the Edgewater for gambling.

By December 1940 the weathered wooden lady was closed and forgotten. A small riding academy used part of the grounds and a caretaker family looked after the big house. Three days after the owner had his mortgage foreclosed a suspicious fire broke out. Thousands watched the historic structure, which began as a gift from the sea, end as a burnt offering. The "house of mystery" was no more. 7


Thanks to Brian Riggs, who looked this article over. Mr. Riggs wrote a terrific manuscript on the fascinating Russell family that still needs a publisher.

Matchbook for Tait's at the Beach, San Francisco, n.d. -

Contribute your own stories about Tait's!