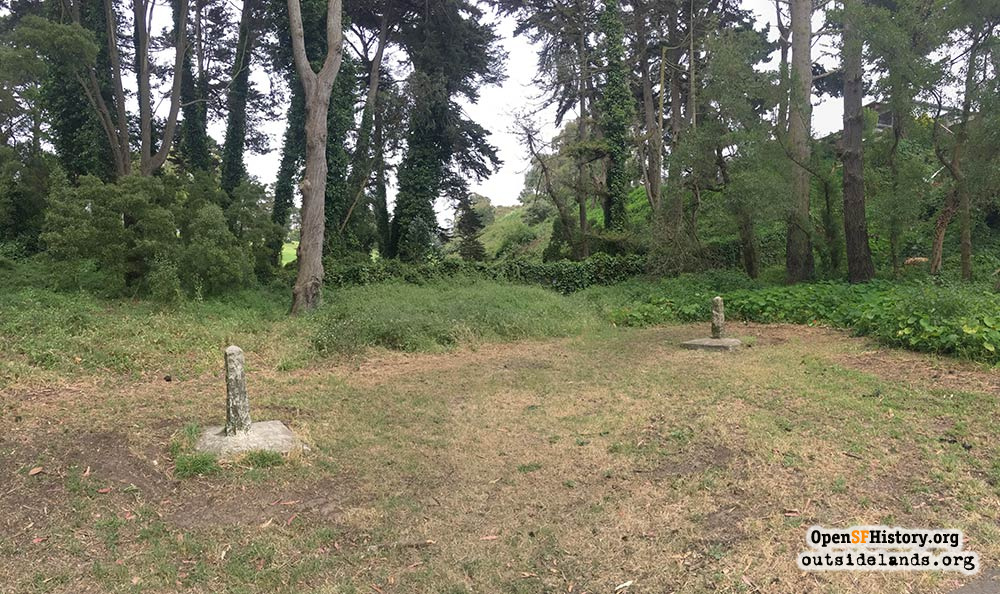 The 1859 duel between Broderick and Terry at Lake Merced.

The sky is overcast, a gunmetal gray, here on the southeastern edge of Lake Merced. I've just driven past Brotherhood Way on Lake Merced Boulevard, and I'm about ten joggers away from the intersection with John Muir Drive. Before I cross over into San Mateo County, I slow and turn left into a small, deserted parking lot.

I pull in across from fenced-off tennis courts. They seem newly painted: forest green is in play, burnt sienna is out. No one is playing. There's no sound but the oscillating whir of distant leaf blowers. Next to the courts is a small plaque commemorating an eighteenth century camp site, but that's not why I'm here.

I sidle through a small opening of a fence into a triangle-shaped park. A monument points me in the correct direction: down a path into a wooded ravine, just outside the county line.

This is where a Chief Justice of the California Supreme Court shot and killed a United States Senator.

On the morning of June 26, 1859, David C. Broderick sat at breakfast at the International Hotel, reading a newspaper. He wasn't happy.

Nationwide, the Democratic Party was splintering over slavery, and Broderick, himself once the driver of a great political machine, was personally close to political ruin.

Due to a long-standing rivalry with William Gwin, his fellow senator from California, Broderick found himself suddenly at odds with the majority of his party in Washington.

To make things worse, James Buchanan, the president he had faithfully campaigned for, counted himself a friend of Gwin's and made it clear he was not one of Broderick's. Among other slights, the president had cut Broderick out of the political cash of the time: patronage recommendations for federal jobs. Broderick's supporters had since been voted out of power within California, and the senator, prone to depression, had started predicting his own death.

Now, over breakfast, Broderick read excerpts from a speech Chief Justice David Terry made at the state convention, a speech in which Terry ran down Broderick's faction and portrayed the senator as an abolitionist and disloyal Democrat. It was more than Broderick could ignore.

In a temper, he tossed the newspaper towards a friend of Terry's, and called the chief justice a miserable wretch, part of a miserable, corrupt Supreme Court.

David Terry was probably the last prominent man in California one wanted to provoke. A large Southerner with a hot temper, he carried a bowie knife, and had been known to use it. He'd sooner propose a duel than tie his shoes.

David Terry and David C. Broderick were in all respects opposite sides of the state Democratic Party.

Terry belonged to what was popularly called the "Chivalry": Southern-sympathizing men who looked to legalize slavery (or as Terry put it, "open a portion of the California to Southerners and their property") and maintain a class-based power system. Broderick, son of a stonemason, had battled his way up representing the workingman. 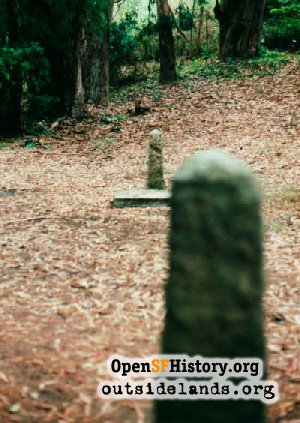 Granite shafts erected in 1917 by the Native Sons of the Golden West to represent the participants of the 1859 Broderick-Terry Duel. - WNP Photo

Broderick's comments reached Terry quickly. Dutifully, the chief justice wrote Broderick of his displeasure at being called a dishonest wretch of a judge: "I now take the earliest opportunity to require of you a retraction of those remarks." Hotheaded and angry politicians of the 1850s could channel their rage in a most elegant fashion.

The two men exchanged a series of notes, and Terry ultimately "demanded satisfaction." Broderick accepted. As the challenged, he presented articles for the duel, which detailed the weapons (dueling pistols), the date and time (Monday, September 12, 1859 at 5:30 a.m.) and the place of meeting (on the farm adjoining the Lake House ranch beside Lake Merced.) The precise spot of the duel was to be determined when the two men and their entourages met.

A large amount of attendant publicity accompanied this quarrel. When the parties came together on the morning of September 12, the well-notified sheriff arrested them. As both men knew, dueling was illegal per the state constitution. When a judge strangely released the men on their own recognizance, the combatants simply decided to meet the next day at the same place and time.

Apparently the sheriff couldn't be bothered to get up early two days in a row.

The two markers at the duel site look like centuries-old milestones from some ancient highway, but they were only erected in the 1940s.

I stand where Terry is reputed to have stood. A short granite shaft with his name on it marks the spot. We are backed up by a small stand of eucalyptus. Ten paces away is Broderick's pillar, with a tall pine tree rising behind it. The hill above the pine is topped with the homes of Henry Doelger's Westlake housing development, but Terry and I have the chili-colored Lake Merced Hill apartments on the ridge line behind us. So it's an even match in every way.

The two men took off their overcoats that had shielded them from the cold wind coming off the lake. Seagulls soared lazily above seventy-five or so spectators that had journeyed out into this lonely spot. Because Terry won a toss of the coin, they used his French dueling pistols.

Another toss of the coin won Broderick the right to choose position and he stood with his back to the rising sun, so Terry would have to face the glare.

As Broderick raised his arm to fire, his gun discharged early. The bullet burrowed like a gopher in the grass, stopping a few feet from Terry's feet.

I look down where Broderick's bullet would have stopped. The pine needles and the dull eucalyptus leaves have created a carpet over silty sand. In 1859, there were no eucalyptus or pine; only the sand would have been here, perhaps some beach grass and wild strawberries.

With Broderick looking bewildered, the judge fired, hitting the senator through the right lapel of his coat.

Physicians believed Broderick would live, but Terry had hit a lung. The senator from California died at a private home at Black Point three days later. (The house still stands as part of Fort Mason.) At Broderick's bedside stood his good friend Edward Baker, a point of which the nation would be often reminded in the coming months.

Edward Baker's speech at Broderick's funeral turned the stonemason's son into a hero in every way, and didn't hesitate to depict him as a political martyr. When Baker ran for office in Oregon, and campaigned for his new party nationally, he transformed Broderick from a loyal Democrat into an unjustly slain champion of the Republican Party.

Terry and the Chivalry were demonized in the newspapers. The duel between the two men began to be called a murder and even an assassination.

In 1860, the Republican candidate for president, Abraham Lincoln, carried California by 614 votes. The discord between North and South that Terry and Broderick had symbolized soon erupted into the carnage of a civil war.

One hundred and forty years later, I linger in this lonesome, still place. There are very few spots in San Francisco one feels as alone as I do now. Abruptly, two golfers lope by a hundred and fifty yards to my left. The west edge of the San Francisco Golf Club borders the site. The grass on the green is brilliant under the overcast glare, especially from back in this dark spot.

The golfers take their shots and head away. 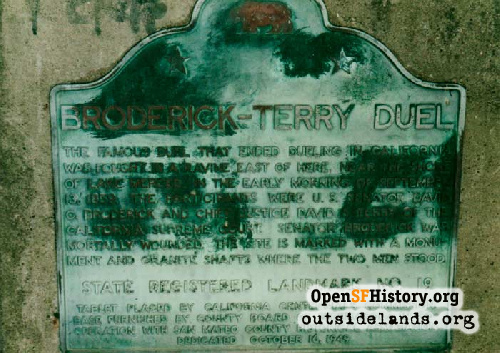 More: Watch the reenactment of the duel for the 150th anniversary.

"The locality of the Broderick-Terry duel on September 13, 1859," Hermann Schussler (1842-1919), Printed for the Historic Landmarks Committee of the Native Sons of the Golden West by John Henry Nash, 1916.

Enough of us talking! Tell us your stories.