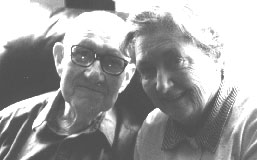 Pat and Carl grew up in the same neighborhood, lived on the same street at one time, went to Star of the Sea Grammar school together in the 1930s, but didn't meet until after World War II at a college mixer. As Pat says, Carl "was just biding his time."

Carl remembered being in the first class of the new school at Star of the Sea in 1930. "Monsignor Ryan got the men to build the whole building over one summer." Carl met his two best friends there in the first grade: Norman Black and Kenneth Ross in Sister Serena's class. The three are still great friends today.

Pat's family lived on 14th Avenue for awhile and recalled the well-off folks she lived among. "The butler [of a childhood friend who lived on the corner of 14th and Balboa] was always making butterballs for their formal dinner every night. She was bathed by a maid... It was like the Great Gatsby."

They told us about the local version of Burns & Allen on the radio ("Cecil and Sally"), about Italian families in covered porches making ravioli and their own wine (from home-delivered grapes) on 9th Avenue. "There were rabbit hutches; it was like Little Italy."

When we asked if the surrounding blocks had such an Italian flavor Pat laughed "Gee, we didn't stray. We had everything!" They listed the neighborhood businesses from the time: the El Portal nightclub on the corner of 8th and Fulton; George Bowen's grocery at 8th and Geary; the Flying-A Gas Company at 9th and Geary (where "Clarence" manned the store); Ginotti's Coal Company across Geary from Star of the Sea; the St. Francis Riding Academy at 8th and Cabrillo, where the Safeway is today. "People kept their horses there to ride in the park. I'd play in the hay, watch the blacksmiths. The junk man had a horse..."

"When I was a little kid," Carl said, "The garbage men had horses. They had these huge horses. I understand they got these horses from the fire men, from the fire houses when they got too old. And when I was a kid I wanted to be a garbage man so I could drive those horses."

Despite being kids during the Depression, they couldn't help enjoying themselves. "We had a lot of fun during the Depression. But you made your own fun. The movies were only a dime, but you spent the whole week getting your dime together. We were all in the same boat." They both remembered the men who brought goats and ponies around for the kids to pose on. Carl: "There used to be a guy who had a megaphone who sang on the street... He had a great voice." Pat: "My biggest shock about the Economy was when the monkey and the organ grinder came around and the monkey wouldn't take a penny anymore."

Pat and Carl never escaped the Richmond. Fifty-two years in their current home! They raised 8 kids there, who covered 26 years of schooling at St. Monica's school. This past Christmas they had the pleasure of having 35 children and grandchildren come over.

They appreciate the changes to the neighborhood, but recognize it's a different world now. "I called Carl to the backyard one day and pointed out to a neighbor's clothesline. Instead of clothes, they had fish out to dry. A whole new universe."

Pat shares her wonderful memories of the Richmond with community papers and with us! Read her columns: