The first store opened in the Ingleside in 1969. 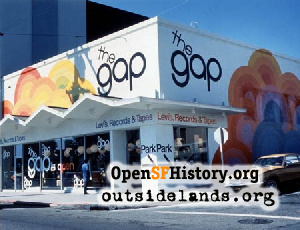 Now a multi-billion dollar clothing empire, "The Gap" began with one store on Ocean Avenue in San Francisco's Ingleside district.

Doris and Don Fisher opened their counter-culture-influenced jeans and record store in the northwest retail corner of the El Rey theater building on Ocean Avenue and Fairfield Way in 1969.

By 1970, they had a second store in San Jose and over $2 million in sales. Today, Gap, Inc. includes the Old Navy and Banana Republic stores and is the second-largest clothing retailer in the world.