This is the story of a little store that was at 2450 Judah, on the northeast corner of 30th Avenue, its moment in time and the evolution of its location. The photo was dated on the back as June 8, 1934. What we see in the signage and displays in the front yard are fascinating to view and interpret three-quarters of a century later. 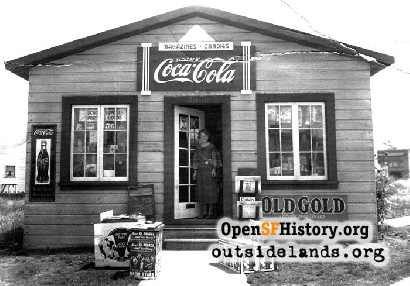 "The Trading Post" is written in chalk on a blackboard near the front door, followed by a list of some of the products they carry—school supplies, vitamins, magazines etc. and soda pop. The sign in the window also says "School Supplies," as well as "Sporting Goods." There are Coca-Cola signs above the door and on the west edge of the bungalow. Under the right window is large sign for Old Gold cigarettes, with the healthy boast, "not a cough in a carload." A very curious ad campaign for a product we know today as a proven contributor to cancer.

The Trading Post displayed some of the popular magazines of the day. Seen out front are Collier's, Boy's Life. Love Story, Picture Play and a short-lived humor magazine called Ballyhoo. Street and Smith published Love Story and a great deal of pulp fiction. No doubt their Nick Carter Detective Magazine and a wider selection of other pulp favorites were for sale inside the store. On the right side of the door, there is a rack with the afternoon newspaper, The San Francisco News. We must assume that there were a variety of penny candies available inside as well, since the word "candies" is painted on the large Coke sign above the door.

Visible in the yard is a display ad for Al Pearce and His Gang, in an upcoming issue of Radio Stars magazine. The Happy Go Lucky Hour, his comedy radio program, which started in 1927 on KFRC, was soon to be syndicated on the Blue Network.

This one picture gives us a visual peek at a part of the Sunset District in the Depression years. The building was probably built as a residential bungalow in the late 'teens. In the background we see some evidence of homes on 29th and 30th Avenues. There had been construction along the Lincoln Way corridor in this area, extending south from Lincoln to about half a block past Judah, during the early 1920s, but after the stock market crash in 1929 loan money dried up and there was limited development in the central Sunset until later in the 1930s up to World War II when men and materials were diverted to the war effort. Major residential development would resume after the war.

The Trading Post itself was a neighborhood mom-and-pop store, selling items generally not found in grocery stores in a time when retailers specialized. You would buy meat at the butcher shop, and then go to the produce shop for fruits and vegetables. Drug stores dealt primarily in filling prescriptions and selling over-the-counter curatives, health aids and injury-related products. Vitamin supplements were not stocked in either drug or grocery stores yet. A stationery store might have a limited amount of school supplies, but pens, pencils and theme-books were found in a shop like this, which would often be located near the elementary schools. The selection of magazines is also very indicative of the times. The two most popular forms of entertainment were the movies and radio. This market was catered to by dozens of monthly magazines to glorify the upcoming movies and their actors and actresses. Radio fan magazines existed, but not in numbers comparable to the movie promotion publications. The other major entertainment of the day was reading, and there were hundreds of pulp fiction titles available for a dime.

A neighborhood store like this seldom retained the same owner or stayed in business for very long. The early 1930s were hard times. People were skimping to get by and there was very little left over for frivolous spending on magazines and treats. The merchant in a store like the Trading Post had to keep the shelves stocked, but would only make pennies or less on purchases. The note on the back of the picture, written by the woman in the doorway to her sister in Texas, says they had opened on May 3; she promised to send some candy to her nieces and nephews, and signed it, May and Richard.

The property eventually became a service station as the economy improved, the neighborhood expanded and automobiles dominated the Avenues. Today there is an apartment house on the site.

This photo gives a time-capsule look at a portion of the Sunset neighborhood, developed from sand dunes to a simple bungalow that evolved into a neighborhood store, supplanted by a service station and eventually by a multi-unit dwelling.