This Stern Grove victorian gem has a storied past. 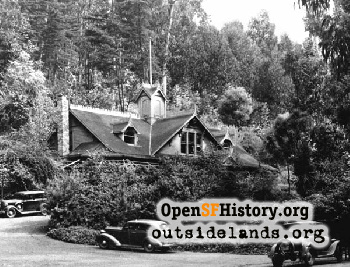 This Victorian gem has a storied past due to its associations with famous San Franciscans, as well as its origins as part of the "Rancho Laguna de la Merced," originally settled by George M. Greene, the father of the man who built the Trocadero Inn.

Architectural details: The Trocadero Inn is a two-story wood frame structure with steep roof and dormers, gothic type cresting on its ridge and wood siding on the first floor with shingles on the second floor. Interlacing stick ornamentation on the first-floor porch and around the windows articulate the principle facade. The building has a simple interior with a paneled bar, and a massive stone fireplace and flue. A center stair hall leads to the second floor double-loaded corridor under the ridge with small rooms front and rear. The second floor has been altered to accommodate a live-in caretaker.

Greene leased the inn as a resort to such notable San Franciscans as C.A. Hooper, Adolph Spreckels, and Hiram Cook. Under Cook, the Trocadero sported a deer park, boating pavilion, and beer garden. In 1907, political boss Abe Ruef was arrested at the Trocadero Inn, where he had been hiding when the San Francisco graft trials began.

Trocadero Inn closed in 1916. The inn is now part of Sigmund Stern Grove, a Recreation and Park department property donated to San Francisco. In 1931, Rosalie Meyer Stern bought the property as a donation to the city for public use and in memory of her late husband. She purchased it from George Greene, the son of the man who had the Trocadero built. Minor renovations were completed in the 1930s, with oversight by Mrs. Stern and architect Bernard Maybeck, who made few changes saying, "We simply had to be careful not to spoil the picture. It was nearly perfect as we found it."