a surfing legend from the Sunset 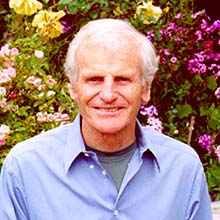 A recent film documentary titled Surfing for Life interviewed men and women between 70 and 94 years old who continue to surf after more than 40 years. One of the youngest people interviewed (at 70) was Fred Van Dyke, the only one of the group to grow up in San Francisco's Sunset District.

A few years ago, Fred wrote a memoir, Once Upon Abundance: Coming of Age in California and Hawaii (Anoai Press, Honolulu, Hawaii;). It describes Fred's childhood in the Sunset, his early years surfing, and his eventual settling in Hawaii. In June 2002, after reading the book and marveling at Fred's life and memories, I had the opportunity to talk with Fred about life in the Sunset District in the 1930s and 1940s.

Fred was born on July 2, 1929. His father was a dentist downtown, but the family had very little money, so they rented houses in various parts of the Sunset--on 47th Avenue, on 19th Avenue, at 11th and Lawton, and on "13th Avenue." (Although the street name was changed to Funston in 1923, Fred still refers to it as 13th and explains that people called it both Funston and 13th.) The family eventually bought a home on 34th Avenue.

One of Fred's strongest memories was the "storm of 1936," when his family lived on 47th Avenue. "The water was washing over the Great Highway and coming into our garage," he recalls. "Everything washed into the garage--water, debris, sand, tropical fish. It finally started to abate, and people started going down to the beach.

Living in a Doelger Home

In 1940, Fred's parents bought for $6,000 a home built by Henry Doelger at 1727 - 34th Avenue. Fred says that most people who bought a Doelger home actually met the builder. Henry Doelger had built his own home at 1995 - 15th Avenue, and Fred remembers visiting the house when he was a child: "It really overwhelmed me because it was so big. It was huge--but it probably wouldn't be considered big nowadays."

Fred also remembers Doelger's reputation in the city: "He was a yachtsman. He didn't give a damn what people thought about him. He'd be out yachting all day and come in wearing dirty, smelly fish clothes and unshaved. He'd walk into the best clubs in the city with these clothes on, but no one ever questioned him because he had so much money."

When the Van Dykes first moved to 34th Avenue, few streets were paved. Five houses stood on his block; only sand dunes lay between 34th and the beach. "We had a fantastic view of Marin County, the beach, and Lake Merced," Fred remembers.

According to Fred, Noriega was paved from 19th Avenue to the beach, but the only way to get to Taraval Street was along 36th Avenue, which ran from Golden Gate Park to Lake Merced. It was a three-and-a-half block walk through the dunes from the Van Dyke home to the N streetcar on Judah Street.

Life on 34th Avenue was quiet. "It was like you were in a ghost town certain parts of the day," Fred remembers. "Some people would take their cars to work or to shop, but not many people had cars." Life in this "ghost town" was so quiet that at night, Fred heard the surf breaking at the beach and the African lions and elephants at Fleishhacker Zoo. During the day, he saw rabbits, raccoons, hawks, snakes, and an occasional deer.

Fred remembers "skiing" with his friends in the sand dunes between 22nd and 30th avenues. He described the scene: "We'd take apart an old barrel and remove the redwood staves. We smoothed them down and tied them around our feet and ankles. There were mounds in the sand dunes. They were fine for skiing, even though you didn't get much speed. They were steep. They would cave in, but we didn't care. We had seen skiing in a movie, and that was our creative way of doing it."

Fred also remembers wind storms that caused people to be "sanded in" much the way people in other climates are snowed in. "It was an adventure for the kids. For my mother and father, it was a royal pain. When [the wind] blew, it penetrated everything. The garage would fill up with sand, and the car--you'd hope it wouldn't penetrate the motor. Some people who left their cars out on the street--it damaged the motor. The sand got into everything."

Those windstorms were not frequent, but after a sand storm, people needed bulldozers to clear the streets. Fred says that sometimes people had to wait three or four days for the bulldozers to reach their street. They could not use their cars. "They had to walk off the street and onto the dunes," Fred recalls. "If you wanted groceries, you had to walk through the dunes down to 43rd Avenue to the store. It just wasn't comfortable."

Fred attended St. Anne's through the 8th grade, then in 1942 went to Abraham Lincoln High School. Streets were being paved and houses were being built, but Fred says, "It was nothing like it is now. I could walk to school all the way through dunes if I wanted to, or I could go up Noriega and up 24th right to Lincoln. I usually went up Noriega because it was easier."

He remembers an early "student protest": "The girls wanted to go to school without bobby socks, but the administration wouldn't let them. So all us guys dressed like girls. The reporters showed up. It was a big controversy. I don't think it changed anything; they still had to wear bobby socks. But the whole city heard about it. I wore pedal pushers; some of the guys wore dresses. It was a great protest before they had protests. They'd kick us out, and we'd come back. It lasted a couple of days."

Fred also talks about "nipping" on streetcar cow catchers attached to the backs of streetcars. "They pushed it up and tied it with a chain. When the car got crowded during rush hour, there would be no room inside, so everyone climbed on the back. Occasionally, the conductor opened up the back window and pounded your hands until you fell off. He'd usually do it when the car wasn't going very fast, but still you had to be well coordinated to not fall on your face.

"Sometimes there were so many people sitting back there that the chain broke and the cow catcher fell. Sometimes it would crush a person. It didn't happen often, but it did happen. It terrified me, but I still did it."

After a thwarted first love, Fred was not happy in high school and did not do well. He graduated in June 1946 "with a D average." He matriculated at Fresno State College on a football scholarship, but during his freshman year, he suffered a ruptured kidney while playing football. He quit school and returned home to the Sunset to recuperate.

To regain his health, Fred spent hours each day walking and jogging along Ocean Beach. One day, he met Cliff Kamaka, a Hawaiian swimming champion, who was body surfing, despite what Fred calls "the Ordinance against swimming at Ocean Beach." Fred was about to discover what was to become his lifelong passion: surfing.

Cliff taught Fred how to body surf in the frigid Ocean Beach water. Wet suits hadn't been invented yet! Fred explains, "It was before I even rode a board. It was just body surfing. It was fantastic to have such a wonderful outlet. It was so satisfying. There was nothing frustrating in it. If you wanted to swim out to the breakers, you could do it. If you wanted to catch a wave, you could do it. There was no one out there. You were all by yourself, with probably a few white sharks."

Fred credits Cliff Kamaka for helping him see life in a different way: "He not only taught me to body surf, but he also had in him the whole Hawaiian culture, which was beautiful. I was opened up to things I'd never seen in my life." In his book, Fred wrote, "Cliff showed me daily that surfing was not a sport, but a way of life, a style of living I wanted to make mine forever."

While earning a bachelor's degree and teaching credential at San Francisco State College, Fred progressed to board surfing--back when boards weighed 50 to 100 pounds, and surfers wore wool shirts to try to keep warm. He spent hours in the waters off San Francisco, Santa Cruz, and Southern California.

In 1955, Fred moved to Oahu. He earned his living by teaching high school; he fed his spirit by surfing whenever he could. He repeatedly talks about the various places he has surfed that were open, clean, and free of surfers. He bemoans the fact that now 100 surfers ride the waves at beaches he used to share with just four or five.

Over time, Fred became a legend as a pioneer of riding the huge, 30-foot waves of Hawaii's frontier coastline. He wrote five books including 30 Years of Riding the World's Biggest Waves. Fred help found and later wrote for Surfer Magazine (owned by John Severson). He was senior editor at Ocean Sports International magazine for six years and still writes articles for a variety of magazines. Fred appeared as a surfer in the 1960s Hollywood movies Beach Blanket Bingo and Ride the Wild Surf. He has been interviewed numerous times for television programs and for sports and surfing publications.

Many know Fred as a teacher for 30 years at Punahou School in Honolulu. Most know him as a man who is passionate about health and physical fitness and an activist to protect nature's precious beauty and resources. Fred is also an avid fly fisherman, hiker, jogger, swimmer, surfer, and skier.

A Return to Lincoln High School

In 2002, Fred was honored by the Abraham Lincoln High School Alumni Association. The school has created a "wall of fame" with alumni names and achievements, and this year they wanted to add Fred to the display.

"They all wanted me because I am famous in a lot of places," Fred says. "I think it's the greatest honor of my life. I've been in Sports Illustrated three times. I've written in many magazines. This is the accomplishment of my life. I'm really proud of having gone to Lincoln."