"Lovie Ward was a giant in the African American community -- an absolute beacon for the people of the OMI neighborhood. He was one of the nicest people you could ever have hoped to meet."
--San Francisco Mayor Willie Brown 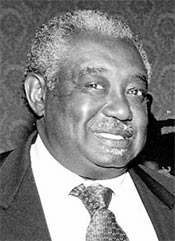 Mr. Ward had been in poor health for many years, but didn't let it stop his passion to serve. With his wife Minnie by his side, he fought diligently for a better and safer community for the residents of the OMI for over 30 years.

Lovie and Minnie were co-founders of the Ocean View-Merced Heights-Ingleside Neighbors In Action organization that actively fought to rid the neighborhood of drugs, violence and black on black crime. In 1990, Mr. Ward's house was riddled by bullets from assailants who wanted to curb his activism. In an interview following the incident, he vowed that he was "more determined than ever to fight on."

He was instrumental in cleaning up the once drug and crime ridden Ocean View Park. His death came a few months shy of the official celebration renaming the park for he and his wife in November.

Annually, he was an organizer of the park's OMI Family Day, donating his time and money in an effort for families to reclaim their neighborhood through fun and fellowship.

At a recent tribute, Mayor Willie Brown called Mr. Ward "a great fighter for a better San Francisco." The mayor said he often put his life on the line.

"Lovie worked tirelessly with me to help clean up the community. I depended on his guidance, and he will be tremendously missed," stated Assemblyman Leland Yee.

Mr. Ward and his wife received numerous awards and proclamations for their tireless work. Those who knew him and worked with him said in his own quiet way, he was very pleased at the many testimonials of those who came to him and exclaimed how he had touched their lives.

Having raised his family in the OMI community, he and Minnie rallied to rebuild the dilapidated Sheridan Elementary School that sits across the street from their modest home. Their efforts also resulted in the completion of the new Ocean View Library and the formation of the popular police patrol TNT (Taraval Neighborhood Team) unit some five years ago.

Mr. Ward was often at the forefront of continuing the tradition of ancestors who were committed to public and individual service. He tithed generously of his talents, wisdom, resources and the precious gift of his time. Mr. Ward believed that religiosity should not be confined to a spiritual edifice, but should be fanned out to a community.

A renaissance man, he patterned his life after the icons of blues and jazz music which now have set the tone of the contemporary music that millions enjoy today. He was a great cook, an avid Raiders football fan, a great fisherman and the community's mechanic.

On a personal level, Mr. Ward adored his wife, loved his son and daughters unconditionally and was absolutely insanely in love with his grand and great grandchildren.

Lovie Lee Ward was the second born of Clarence and Gussie Ward on January 19, 1934 in the state of Louisiana. The family soon moved to the Bayview/Hunters Point district of San Francisco where he was raised with four other siblings. He was educated at Burnett, James Lick and Commerce public schools. Before retiring in 1977, Mr. Ward worked for many years at Galland Linen as a stationary engineer.

From birth to transition, Lovie L. Ward was known as a person of substance, perseverance and tenacity. His formative academic sojourn from Louisiana to San Francisco was not only a hymn to the grace of his immediate family, but also to the memory of the strong and noble community of San Francisco.

His objective was to make a contribution that would outlive him. Just as late great poet Langston Hughes is remembered to Harlem, Lovie L. Ward is saying remember me to San Francisco!