Wave Motors and Tide Machines at the Cliff House: 1886 to present

Wave Motors and Tide Machines at the Cliff House: 1886 to present 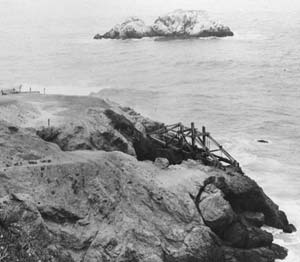 In the early 1890's somebody built a wave motor across a chasm in the rocks of Parallel Point, but who did it is a mystery. It was not there in 1891 when the Holland wave motor was making news but it was there in March of 1896, when an article in The Call mentioned "two gaunt, weatherbeaten and abandoned structures" just north of the Cliff House. "They are the ghostly skeletons of unsuccessful experiments made to utilize the power of the waves." 4

When Robert O'Brien wrote about the wave motors of the Cliff House in 1947 he wrote of this bridge-shaped wave motor as well:

"The one across the chasm is in the form of a bridge, perhaps 60 feet long. A framework drops from the center of the bridge into the chasm; apparently it once held a great paddle which moved to and fro with the water as it boiled in between the narrow walls, and then receded. And it was probably this movement of the paddle which somehow was to supply the perpetual power... No one seems to know when it was built or who put it there. Very few people, in fact, seem to care. Yet, mocked by the rushing sea it was meant to leash, there it rests, the symbol of a failure and--a riddle." 5

The bridge-shaped wave motor and Holland's wave motor did share one thing in common with their predecessor, the Steen wave motor. When a shipwreck made news, they made news by association.

On October 7, 1922 the Lyman A. Stewart collided with a freighter in a thick fog and wrecked at Land's End not far from Holland's wave motor. On the same day, exactly 14 years later, the freighter Ohioan crashed in between the two wave motors. As a result, nearly all photographs of the wreck of the Ohioan include a wave motor.

On March 6, 1937 the tanker Frank H. Buck wrecked off of the coast of Land's End not far from Holland's wave motor. Incredibly, the Frank H. Buck was the sister ship of the Lyman H. Stewart. The two ships meeting their end in the same area 15 years apart was irresistible drama to local papers which ran pages of dramatic photos of the eerie wrecks at Land's End.

In 1937 the Lyman H. Stewart and the Frank H. Buck were dynamited in order to beautify the entrance of the Golden Gate. In January of 1938 a winter storm destroyed the Ohioan driving the pieces on to the shore.

The bridge-shaped wave motor was probably dismantled in the early 1950's when the observation platform above the Sutro Baths was constructed. 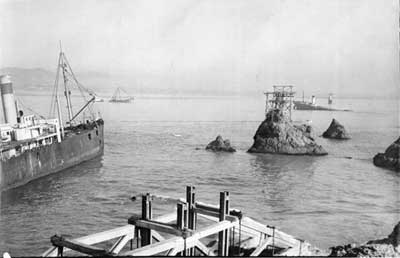 In June of 1893 there is a story in the Examiner about experiments near the Cliff House with "a small force pump actuated by the motion of the waves, for the purpose of pumping water into a reservoir at an elevation of about 100 feet..." 6 Again, the purpose was to run water up the hill and then have the falling water run dynamos that would generate electricity.

This small-scale project does not mention a specific inventor by name. It appears to be a lone experiment, but an apparently successful one as far as the pump was concerned.

After his success with the Aquarium, Adolph Sutro began work on the planned swimming ponds to be adjacent to the large tide pool.

As he began to work on this project, it became more and more elaborate. Sometime between 1887 and 1890 Sutro decided to build six large pools and to heat and enclose them in an enormous glass building. He devised a plan for the water supply and invented the machinery that heated the water.

The Aquarium gradually became the Sutro Baths. In August of 1891 the foundation had been laid and the swimming tanks were graded. In 1892 an architect's competition for the best design for the new bathhouse was won by C.J. Colley and E.S. Lemme. In September of 1892 the swimming tanks were fully operational and could hold roughly 1,800,000 gallons of water. The tanks could be filled in one hour using the power of the tides. A pumping system used during the times of the year when the tide was too low could fill the tanks in five hours. Emptying the water from the Sutro Baths was done by piping it hundreds of feet out into the ocean where tidal currents could pick it up and move it southwards. A powerhouse built at the rear of the building in 1892 was the sole source of electricity for the Baths until 1912 when Pacific Gas & Electric took over their service needs.

When it was finished, the Sutro Baths was the largest natatorium in the world. It had 7 swimming tanks, the largest of which was an L shaped tank 275 feet long by 150 feet wide. The other 5 salt water tanks were smaller and the seventh was a fresh water tank. The spectator seating held ten thousand people. It included a museum of curiosities and several restaurants. There were over 500 dressing rooms. The roof contained 100,000 square feet of glass. The width of the building was 254 feet and the length 499.5 feet. The Sutro Baths opened officially on March 14, 1896.

In an interview in 1894 Sutro had stated that, "The aim was to get the privileges of salt-water bathing within doors and away from the dangers of the open surf. For the accomplishment of that I conceived the large house right on the beach, where the bathing tanks could be filled directly from the ocean and emptied and renewed as often as desired." 7

The Sutro Baths were oddly practical in that one perspective. They made the ocean safely accessible to everyone. For many people visiting San Francisco, a trip to the Cliff House/Ocean Beach area provides their first experience with the Pacific Ocean. Ocean Beach is however, an incredibly dangerous beach.

Over a hundred years later, in 1998 it was deemed the "deadliest city beach in the United States" because of the dangerous rip currents, the large crowds and the lack of lifeguards. 8

Adolph Sutro died two years after his Baths were completed. Although he had never expected them to be a money-making enterprise, he hoped they would be self-sustaining. His heirs managed the Baths for many years, but gradually reduced the number of swimming tanks. In 1952 the Baths were sold to George Whitney. In the mid 1950's the swimming tanks were permanently closed and an ice rink built over the pools became the main attraction. In early 1966 the Sutro Baths closed for good and in March plans for an apartment building/shopping complex at the site were announced. In June of 1966, demolition of the Baths was underway when a large fire finished the work. Only the foundations of the Baths pools and the canal works of the Aquarium remained intact. The planned apartments were never built. In 1980, the Sutro Baths cove was bought by the National Park Service and it is now a federally protected site.

The last wave motor project undertaken at the Cliff House was in January of 1948 by 67 year old "Professor" Lewis Reece. This experiment took place about 50 ft north of the Cliff House observation platform.

This wave motor involved a drum buoy with an 800 pound anchor. The drum buoy would be moved by the swells of the ocean and this motion would be transferred by cable to machinery on the shore that would generate electricity. Reece intended to make ice from the exhaust of the reciprocating engine.

Crowds gathered at the observation platform and clung to the sides of the cliff in expectation of the event. In the end, the 800 pound anchor refused to stay anchored.

The Chronicle reporter who covered this event summed it up this way: "Man's eternal dream of harnessing the wild waves--to make the tide not wait for, but wait on man--took another drubbing yesterday... If it hadn't been for the tide the thing might have worked." 9

Reece tried several more times but his machine never proved to be a success. 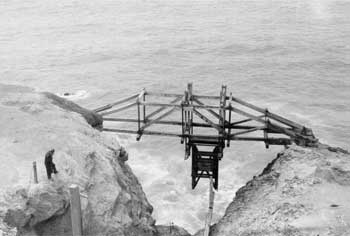 Wave Motors and Tidal Energy Today and in the Future

Today, the ruins of the Sutro Baths/Aquarium are all that remain of California's best venture into tidal energy. New visitors to the ruins are usually spellbound by the lost grandeur of the Sutro Baths and pay little attention to the importance of the canal way and tunnels.

Perhaps, someday in the future another wave motor will be built at the Cliff House or the Sutro Baths will rise again or maybe just the Aquarium will be restored. Local residents passing through the area today see the new annex of the Cliff House under construction then cast a glance towards the ruins of the Sutro Baths and ask, "So when are you guys gonna rebuild that?"

In a study done in 1993 it was estimated that the cost of rebuilding the Sutro Baths would be over $50,000,000. Unless someone were to volunteer to rebuild the Baths, the cost is too prohibitive for the National Park Service to undertake and the study concluded that the increase in pedestrian and auto traffic to the area would not be welcome. 10

That is not to say however that our government has no interest in tidal energy. On May 6, 2003, the San Francisco Board of Supervisors approved a resolution supporting the development of a one megawatt tidal energy project within three years. This project would call for putting test modules under the Golden Gate Bridge or another site in the Bay where water moves quickly and the most energy can be generated.

The experiments with wave motors conducted at the Cliff House around the turn of the 20th century were examples of the technology when it was in its infancy. Electricity was still new and the limits of the technology of the day were unknown. Today, wave motors are much more sophisticated. The current generation of technology for tidal energy now involves no moving parts.

We can only wonder if we will ever realize the ambitions of our Victorian predecessors to harness the power of the ocean. In the meantime, we have the stories of their adventures and the breaking of the waves onto Ocean Beach to give us thought for the San Francisco of the future.

Thanks to Ranger Bob Holloway of the National Park Service for his help and for providing the photographs, to Peter O'Donnell of the San Francisco Department of the Environment for sharing his knowledge of the City's current tidal power project plans and to Woody LaBounty of the Western Neighborhood Project!

Contribute your own stories about the Cliff House and Baths!