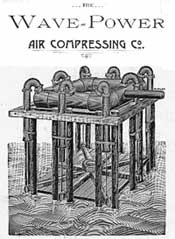 For two decades wave motors of various designs were experimented with along Southern California's beaches. The pattern was to announce a new patent, put the wave motor model on display, and let the public and investors examine the machine. Small trials would be done and then, if successful, full scale plants would be built. Only a few wave motors made it to that final stage. Most notable was the Starr Wave Motor of Redondo Beach which began construction in 1907. It was a large project that hoped to supply power for six counties. In the end, the enormous machine collapsed in 1909 because of the flimsy construction of the pier on which it was attached. The Wright Wave Motor of Manhattan Beach (1897), the Reynolds Wave Motor of Huntington Beach (1906) and the Edwards Wave Motor of Imperial Beach (1909) also made it far enough to have full scale models built. The Wright Wave Motor is the only one of these Victorian era wave motors still in existence. It is buried in the sand at the foot of the present pier in Manhattan Beach.

After the turn of the 20th century wave motor projects in San Francisco were on the decline.

In 1908 the National Power Company saw their wave motor wrecked near Land's End during experimentation. In 1911 the Pacific Wave Power Company took out a lease on land at Baker Beach for a miniature wave power plant. They appear to be the last of their kind in San Francisco. What happened to their project is unknown. 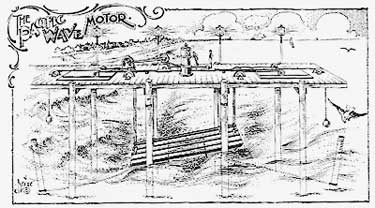 Although interest in wave and tidal power development continued throughout the 20th century, actual public demonstrations became rare. In 1948, the exception to that took place, and the Cliff House again became the spot for wave power experimentation in San Francisco. This time it took place on the cliffside between the Cliff House lower balcony and the Sutro Baths. The inventor's name was Lewis Reece and he received some press during the trials of his wave motor. Viewed more as a novelty act than a serious scientist, Reece gave electricity from the ocean some publicity but his machine was uncooperative. After several tries his wave motor proved unsuccessful.

In the second half of the 20th Century development of wave and tidal power continued elsewhere in the world but in California it saw little practical development. In the Bay Area in 1965, a marine engineer from Oakland made news with his new wave motor and claimed that a model had worked successfully in a cove at Muir Beach in Marin for over a month. In 1983 the Berkeley City Council voted to install a wave motor offshore the Berkeley Marina but the project did not go through.

According to the California Energy Commission, in the last decade, projects have been discussed at Half Moon Bay, Fort Bragg, San Francisco and Avila Beach. Issues that have prohibited the development of wave power in California include the limitations of the technology, environmental impact issues, disturbance of marine life, high costs, concern over possible collisions with ships and other problems.

The power issues challenging the city today are far more complex than those faced by Victorian-era San Franciscans for whom coal was the primary source of energy. At the beginning of the 21st century, San Francisco is struggling for relief from the monopoly utility that has controlled its power supply for decades, Pacific Gas & Electric Company.

City-owned renewable resource projects that include solar, wind, tidal and wave energy are being pursued to help overcome the many issues faced in supplying San Francisco with power cleanly and effectively. Two polluting power plants, one at Hunter's Point and the other at Potrero Hill create an immediate need to find new sources of power. Limited transmission into the Bay Area and San Francisco also contributes to the need to find alternative means of power which can be generated within the local area.

In February of 2003 the San Francisco Local Agency Formation Commission held a public hearing on tidal energy and how it could benefit San Francisco. On May 6, the Board of Supervisors passed a resolution to build a 1 megawatt pilot project within three years. A year later, in June of 2004, the LAFCo held another hearing on the status of the tidal energy project and to introduce an offshore wave energy project being proposed for Ocean Beach. The proposed site for the project is at the southern end of the beach near Sloat Blvd.

Aside from providing new sources of power, if San Francisco does develop tidal and wave energy projects they would provide scientific attractions not unlike the Sutro Baths and the Santa Cruz Wave Motor once did in their day.

Elsewhere in California, an experimental wave energy system is being tested in Trinidad in Humboldt County where issues with PG&E, an older oil-burning plant and power disruption are problems that an alternative energy source would help overcome.

What will happen to these projects and their new technology remains to be seen but as long as there is the possibility to generate power from the ocean, Californians should continue to pursue the potential. The words the Santa Cruz Sentinel printed in 1896 remain true to this day; the success of any of these projects would mean, "a mechanical revolution so vast as to be beyond the powers of comprehension". 11


Read Christine Miller's other wonderful articles and contributions to our Web site:
Wave Motors and Tide Machines at the Cliff House: 1886 to Present
Explosions and Flames: Disasters at Land's End
Sutro Heights Album

For more information on the Santa Cruz Wave Motor please visit www.sandylydon.com, Home of the History Dude of Santa Cruz, look under the subject heading of "Secret History".

Information on California's wave motor projects has not been easy to find and the author wishes to thank the staff of the San Francisco Main Library for all of their help in obtaining needed materials. Thanks also to Ranger Bob Holloway of the National Park Service, Sutro District, for his help with this project and to Sandy Lydon, Historian Emeritus, Cabrillo College, for his help with the Capitola and Santa Cruz wave motors. Thanks also to Bonnie Minford of the Santa Cruz Seaside Company and to Bonnie Beckerson of the Manhattan Beach Historical Society for taking the time to help me in my search for information. Thanks also to Woody LaBounty of the Western Neighborhoods Project!