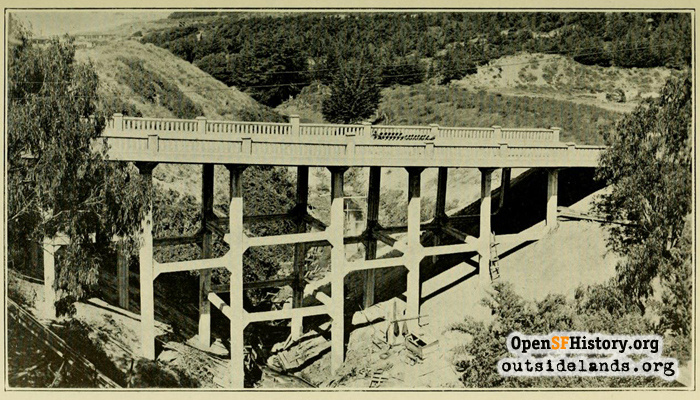 How Water Shaped Development of the Outside Lands

Initial development of the Richmond and Sunset Districts was predicated on the availability of water.

How Water Shaped Development of the Outside Lands

San Francisco has unique geography. Over millennia of faulting, folding, uplifting and subsiding, the land surface at this end of the peninsula has a mixture of high peaks and low depressions, with a rock base and more than a third of it covered with dune sand. Beneath our western waters is sand from other geological developments south of us. The uplifting of the Sierra created rivers that moved millions of tons of glaciated sand westward across an inland sea, to exit the Coast Range at the Golden Gate, and deposit additional sand at our western edge. The sand bank shown on maps actually stretches under water all the way to the Farallon Islands. Tides, wind, and erosion contributed to the buildup of the sand throughout the north end of the San Francisco peninsula.

The shifting sand of this desert was the major deterrent to travel and homesteading, but the pioneers learned to cope in various ways. Large portions of the emerging city's sand was moved into low spots or dumped into the tidal margins to create "made" land. The hills of San Francisco are a vital part of the development of the city. In earlier times, most of the steeper hills were impractical to build on because of the difficulty of access by horse and wagon, but also because there was no reliable water source atop the hills. As the city developed and pumping became feasible, many of the hills were used to create reservoirs for water from other sources to be stored for domestic use or fire protection.

Sand is a porous substance, allowing rainwater, even fog, to seep through it to the bedrock basin or aquifer. Before there was a reliable water system in San Francisco, wells were dug near the drainage of the hills to access that water. The topography of the Richmond and Sunset Districts is different, and these differences greatly affected their development. The Richmond District has a series of hills draining into it from three sides. The Sunset has primarily one hill system on its eastern flank, draining west toward the ocean and south toward Pine Lake and Lake Merced.

To best understand the original drainage system of the western portions of San Francisco where pioneers settled--the Richmond District, Golden Gate Park, and Sunset-Parkside areas today--we need to consult the major topographical map done by the United States Coast Survey of 1869. (See below.) This map was created before the street grid extended beyond the cemeteries or Golden Gate Park boundaries were drawn, but there are landmarks we can still reference today. 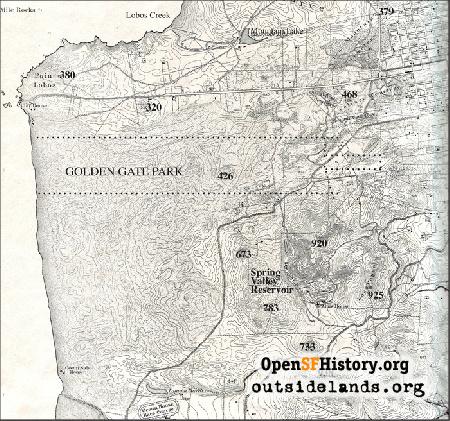 The 1869 map shows four major high points of land on the east of the southern side of the Great Sand Bank. The hill with an elevation 673 would be Grand View Park in Golden Gate Heights. South of that hill, marked 783, is the original elevation of Larsen Peak. Hill 733 is the original elevation of West Portal's Edgehill Mountain, and lastly, hill 938, the highest elevation in San Francisco, is Mt. Davidson. Early development in the Sunset could be found at the base of these hills where water was available and near Pine Lake and Lake Merced. Water could be found fairly close to the surface back from Ocean Beach as well, but only near Golden Gate Park. A well in the middle of the current Sunset District would have to be drilled down through 400 feet of sand to reach the aquifer.

The topographical map reveals additional information about the drainage of these Sunset high-points. While they drain west and south, they also drain north through a narrow gorge, marked on the map as "Spring Valley Reservoir," which was fed by the Sunset hills noted earlier, and the drainage of the west side of Twin Peaks (identified on the map as Las Papas and showing the south peak at 925 feet). Today this same reservoir site is at the intersection of Laguna Honda Boulevard and Clarendon Avenue. North of the reservoir can be seen a seasonal lake stretching to about Seventh Avenue and Moraga today. The map shows no surface river, but if you follow the contours north, another body of water appears, which is the low point of the botanical garden in Golden Gate Park, just north of Funston and Lincoln Way, where originally a lake and later pumping station used the water from that source to irrigate the park. The drainage continued through the park and into the Richmond District, terminating at Mountain Lake and Lobos Creek. Water from Lobos Creek was the city's first domestic source, dating from 1858, when a redwood flume was built from the creek, before it reached the ocean at Baker Beach, around and through the Presidio to a pumping station at the foot of Van Ness Avenue. The water was then pumped up the north side of Russian Hill to two reservoirs, then to be piped to the city's center.

Further study of the 1869 map shows other sources of the drainage toward Lobos Creek coming from Mt. Sutro (920), and the heights of Lone Mountain (468 above the letter "l" in Calvary Cemetery). Farther north, at the end of the word "Mountain" (Lone Mountain was the original name for Laurel Hill Cemetery) is 379, the southeast boundary of the Presidio (corner of Pacific and Lyon today). These high points drained rainwater westward. In the northwest corner of the Presidio was Rob Hill (380), which also drained south to Lobos Creek. Along Point Lobos Toll road, the unnamed paved road running from the cemeteries to the Cliff House, is a knob marked 320. Today this hill, which has lost about 70 feet to quarrying, is called Washington Heights, because it is the site of George Washington High School. It too contributed to the drainage into Lobos Creek, but also drained west to the ocean and south to the western end of what would become Golden Gate Park. The last significant knob, marked 426, is Strawberry Hill, which drained not only to Mountain Lake and Lobos Creek, but also to the unnamed lake in the Botanical Garden, as well as westward toward the ocean.

All this drainage encouraged pioneer settlement of the Richmond District and the survival of Golden Gate Park in a seemingly inhospitable desert. Looking at the map, you can see that the western half of the Point Lobos Toll Road generally bordered the sand dune map markings, while the eastern half actually crossed dunes. Black rectangles represent buildings. These early dwellings, many dairy farms, are either along, or connected by paths to Point Lobos Toll Road, and are in some part of the drainage aquifer, where water would be found with a fairly shallow well. 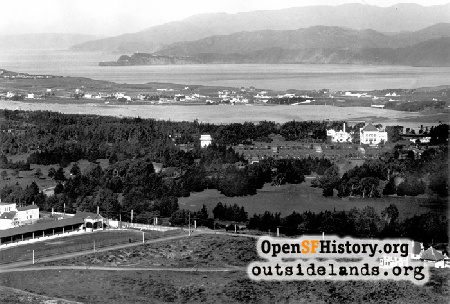 This photo taken from the side of Mount Sutro shows the Inner Sunset, Golden Gate Park, and the mid-Richmond District dunes that stretched south from Point Lobos Avenue to Fulton Street. -

Golden Gate Park was established in the western dunes to settle squatters' claims and open up the western Outside Lands to adjoining development, but also because it had abundant water, fairly easily obtained under the surface dunes. The major drainage from the Mt. Davidson-Twin Peaks-Golden Gate Heights system flows along Seventh Avenue to an irrigation reservoir also fed by the drainage of Strawberry Hill. Strawberry Hill also drains west, and early engineers built windmills near the ocean to pump that irrigation water back up to a moat built around its base we call Stow Lake, then used gravity feed for watering plants. The southern drainage of Washington Heights and the general western land slope was captured as Chain of Lakes, another irrigation source.

The Richmond District did not develop at once or in an orderly progression from Arguello to Great Highway. The early development of the neighborhood, before city water services, was in clusters, determined by access to potable water. The Sunset-Parkside Districts followed a similar pattern, with early development within the drainage of the eastern block of hills, near Sigmund Stern Grove (Pine Lake) and along the western edge near the Ocean Beach aquifer. Both neighborhoods were slow to develop the major sand dune areas. 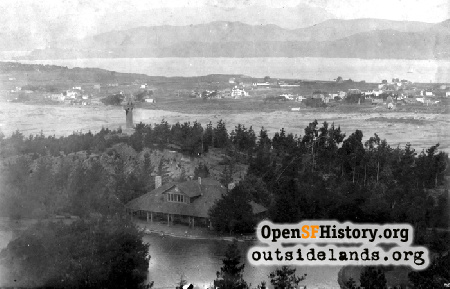 This photo from the top of Strawberry Hill shows the original rustic-style Stow Lake boathouse, Praybook Cross, and the Richmond District. What first appears to be water right beyond the trees of Golden Gate Park is actually sand., 1900 -

The pictures show the Richmond District dunes around 1900. Taken from Mt. Sutro, one shows the mid- Richmond District dunes, stretching south from Point Lobos Avenue to Fulton Street. The other image taken from the top of Strawberry Hill in Golden Gate Park. These dune areas of the Richmond began full block development in 1903 and continued west until the late 1920s. The Sunset started block development after the 1906 earthquake around the margins of the neighborhood, nibbling away toward the center, but not completing all blocks until after World War II. Urbanization decreased the ground water as asphalt and homes covered the landscape and storm drains significantly decreased seepage into the ground. However, the Westside Groundwater Basin exists and is monitored as a resource during drought years. This basin extends from below the slopes of Lands End south to Millbrae, in a corridor west of Sunset Heights in San Francisco and between the San Bruno Mountains and the San Andreas Fault lakes in San Mateo County. Only a small portion of it is in the Outer Richmond District, but the basin includes all of Golden Gate Park and the Sunset District. The topography shown in the 1869 map dictated how the western part of San Francisco developed. Most of this land is covered with buildings or trees now, but we can still see the landforms from the heights or feel the changing topography as we walk or ride through our western land.