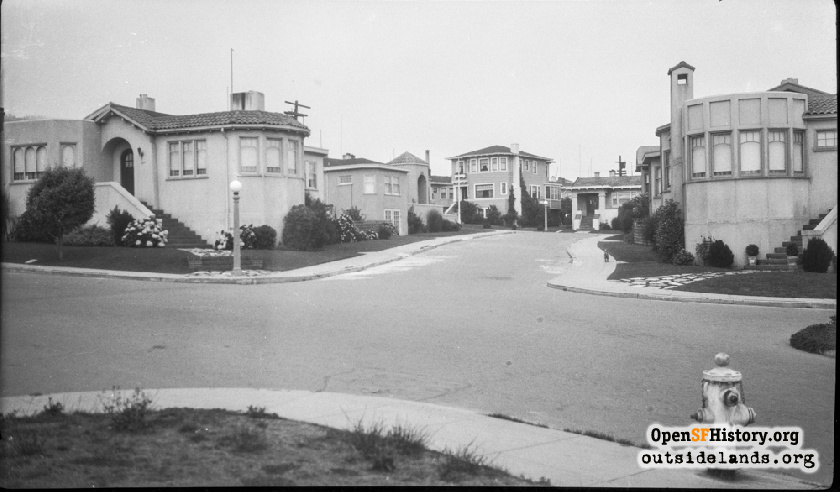 The creation of San Francisco's first residence park for the middle class.

The Birth of Westwood Park, Part I

by Woody LaBounty
Originally appeared in the Ingleside Light, January 2013.

In 1911, when the Residential Development Company purchased Adolph Sutro's vast land holdings in San Francisco's West of Twin Peaks area, large "residence parks" were immediately planned around the site of the west portal of the Twin Peaks streetcar tunnel. These master-planned developments featured homes with covenants banning businesses and minority ownership, while defining minimum construction costs, building design, and yard setbacks. St. Francis Wood, Forest Hill, and West Portal Park joined Ingleside Terraces as new restricted communities West of Twin Peaks, and the houses on their winding streets were intended and marketed to the upper classes: doctors, lawyers, capitalists, industrialists, and corporate heads. But as Sutro's forest of pine and eucalyptus was thinned, and anxious developers awaited the completion of the tunnel that would make their investment pay off, one tract of land was set aside for a slightly different vision called Westwood Park.

The man most responsible for the creation of the Residential Development Company, and transforming Sutro's forested hills into toney neighborhoods, was Archibald S. Baldwin. An experienced real estate man and owner with Josiah Howell of the firm of Baldwin & Howell, A.S. Baldwin had surveyed Sutro's properties for his heirs and pulled together the investors to buy and develop the rural and forested land around Mount Davidson. While the Residential Development Company sold off tracts to Mason-McDuffie, Newell-Murdoch, and Fernando Nelson, each to create their own version of the residence park, Baldwin held back ninety-three acres fronting the north side of Ocean Avenue for an experiment.

Baldwin & Howell was not a stranger to selling residence park lots or development. The firm had sold homes in Presidio Terrace in 1905, and had just recently subdivided the Mission Terrace tract to the east. After seeing the slow sales of the properties adjacent to West Portal, however, A.S. Baldwin decided on an alternative strategy. Instead of targeting doctors and lawyers as customers, Baldwin focused on their clerks. 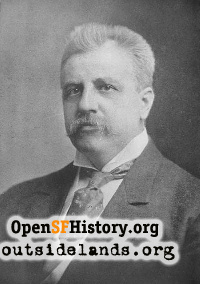 In one of his first public statements about the new neighborhood in August 1916, while work gangs were sawing down trees and pulling up stumps for the future Miramar Avenue, Baldwin made his intent clear:


We propose to put Westwood Park on the market at conservative prices, placing it within the reach of those who desire moderate priced homes in highly artistic surroundings. This will be one of the first subdivisions of this character to be offered in San Francisco. 1

Not that this new neighborhood would be cheap. Baldwin and his fellow investors put $300,000 into development, making clear that Westwood Park would have most of the amenities of the other residence parks: looping, curving streets; wide lots with reserved yard space and front setbacks; buried electric lines; landscaped medians; ornamental concrete lamp posts; and handsome entrance gateways and pillars designed by Louis Christian Mullgardt (well-known for his work at the Panama-Pacific International Exposition and the de Young museum). And while Ingleside Terraces offered Craftsman-style homes and St. Francis Wood took on an Italian Renaissance Revival theme, so Westwood Park would have its own signature style: the bungalow.

Characterized by wide front porches and deep-eaved roofs, the single-story bungalow design had been enthusiastically embraced by the Arts and Crafts movement. They were simple, but attractive, homes with economical floor plans, and usually embellished with rough-hewn elements, natural coloring, and brick or stone foundation facades. Publications described "bungalow cults" and "bungalow fever" in regard to the 1910s popularity of the affordable residences. Baldwin & Howell had built versions of single and one-and-a-half story bungalows in Mission Terrace, and now proposed to build an entire bungalow community with Westwood Park.

Baldwin & Howell formally opened Westwood Park for sale on October 15, 1916, with lots at prices from $1,050 to $1,600. Instead of San Francisco's standard twenty-five-foot-wide lot, Westwood Park street frontages were thirty and forty feet across. Sales agents gave prospective buyers a book with thirty-four bungalow plans to choose from, although, in some cases, owners purchased lots and had houses of their own design erected on them. A bungalow could be bought and built for a down payment of $400 with mortgage payments as low as $35 a month over ten years. So while a property in neighboring St. Francis Wood or Ingleside Terraces might cost $12,000 to $20,000, a pleasant Westwood Park house in almost the same setting went for $4,200. Baldwin & Howell also offered a novel incentive to buyers: a free insurance policy that would pay off the mortgage to the Residential Development Company in case of accident or death. 2

A number of companies were involved in creating Westwood Park. The Residential Development Company owned the land. Baldwin & Howell acted as sales and advertising agents. Construction firms such as Barrett & Hilp and Nelson Brothers purchased lots to build tracts of bungalows. Behind them all, A.S. Baldwin acted as the concertmaster.

Marketing was heavy-handed. Westwood Park was trumpeted as the "tenth wonder of the world," and any possible qualms about buying were countered in one of Baldwin's advertisements or newspaper editorials. Foggy locale? Westwood Park was in "the most sheltered portion of Sutro Forest," and ample sunshine was always mentioned. Too far from work? When the tunnel was finished it would be "22 minutes from Westwood Park to 3rd and Market." An uncertain investment? "Upon completion of the Tunnel we confidently believe that lots in Westwood Park will be selling at from 50 per cent to 100 percent more." 3

The wait for the completion of the tunnel hindered sales for all the West of Twin Peaks properties, and just as it seemed that the long wait was about to end, war in Europe, and possible entry by the United States, further clouded investment. Baldwin referenced the conflict in advertising style, encouraging buyers to "join an army of home seekers" viewing Westwood Park, and quoted the U.S. Vice-President (with photo of him holding a baby) as saying he would be willing to die for his home, but "shall never shoulder a musket in defense of a boarding house." 4

The United States did enter World War I. On October 5, 1918, Baldwin & Howell announced that, in compliance with an edict from the War Industries Board to save materials for the war effort, home building in Westwood Park would be discontinued. A.S. Baldwin would have to wait for the conclusion of the "war to end of all wars" to see if his experiment in bringing the amenities of residence park life to San Francisco's middle class would succeed. 5