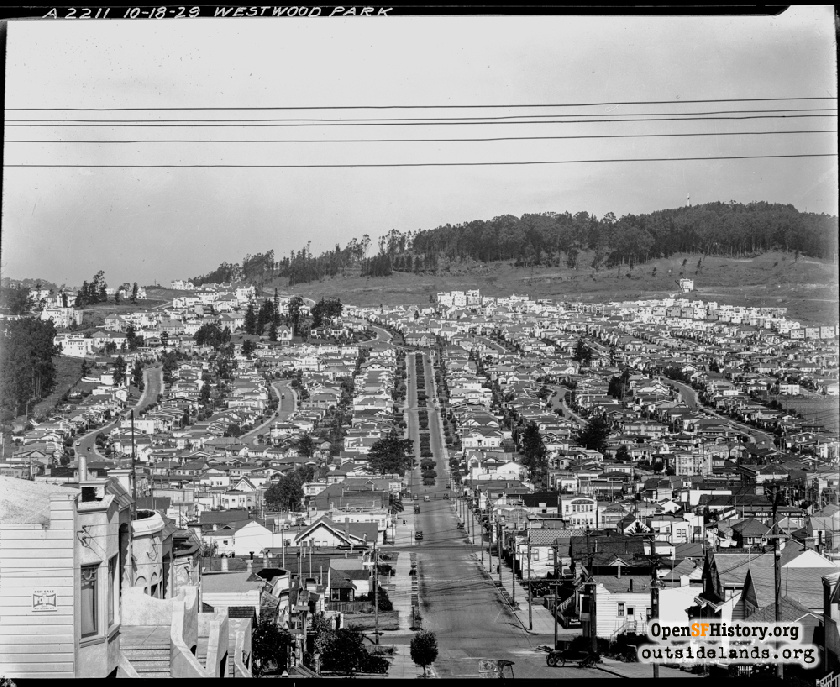 More on the creation of San Francisco's first residence park for the middle class.

by Woody LaBounty
Originally appeared in the Ingleside Light, 2013.

Read The Birth of Westwood Park, Part I.

In 1911, the notable real estate man A.S. Baldwin pulled off one of the greatest land deals in the history of San Francisco. After helping the estate of millionaire Adolph Sutro finally emerge from a decade-long probate, Baldwin then pulled together investors to purchase thousands of acres of Sutro's vast holdings. The land in the center of the city was mostly wooded and hilly, with lower-lying sections rented out to tenant farmers, but Baldwin envisioned a chain of "residence parks" of artistic and expensive homes arising amid the trees and gullies. The residents in these restricted developments would be served by streetcar service from a new municipal transit tunnel piercing Twin Peaks. Baldwin and his partners succeeded in this grand, ambitious plan. By 1916, Forest Hill, St. Francis Wood, and West Portal Park had all become realities. 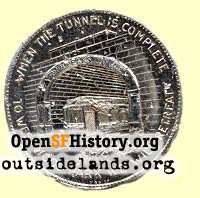 Archibald S. Baldwin could have comfortably rested on his laurels, but instead he invested in an experiment. On ninety-three forested acres of Sutro's land along the north side of Ocean Avenue, Baldwin created a residence park for the middle class. Westwood Park had similar landscape amenities and building restrictions of toney St. Francis Wood, but instead of mansions with maid's quarters and solariums, the tract would feature attractive but simple bungalow homes. His firm of Baldwin & Howell broke ground in 1916. The importance of the Twin Peaks Tunnel to the tract's success was made plain on promotional coins Baldwin & Howell issued as advertisement. On one side was embossed a Westwood Park bungalow, and on the other a couplet: "When the tunnel is complete, to Westwood Park we will retreat."

On February 3, 1918, the tunnel did open, but the United States' entry into World War I had necessitated a redirection of labor and supplies to the war effort. The dawn of the new decade, the Roaring Twenties, would be the true curtain rise on Baldwin's experiment. Could an artistic residence park built for the middle class succeed?

With utilities installed underground or tucked out of sight in the center of blocks, median strips and vest-pocket parks planted with trees and flower beds, and an elegant street plan of loops bisected by landscaped avenues and entered through regal gateways, Westwood Park was well-prepared to dazzle potential homebuyers. With an architectural theme based on bungalow design, building companies such as the Nelson Brothers, Charles A. Hall, Walter E. Hansen, and architects Charles F. Strothoff and Ida F. McCain were charged with fulfilling the development's promise. 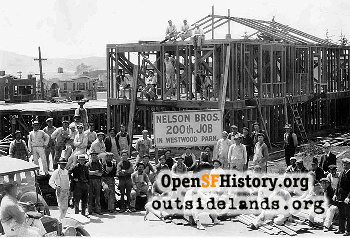 While Julia Morgan is justifiably recognized as one of California's most accomplished architects, she was not the only woman producing excellent work in the Bay Area. Ida F. McCain was featured and lauded by Baldwin & Howell for her elegant designs in Westwood Park, and at one point was identified as the "head of the architectural department."1 The firm featured her likeness in a 1920 ad, stating that the tract owed much to her "skill and tireless energy" designing some of the most notable bungalows in San Francisco.2 Some hundred or more Baldwin & Howell houses began as sketches on McCain's drafting table. Architectural historian Inge Schaefer Horton has pointed out that McCain was not afraid to play with the bungalow model, adding Revival styles, even Chinese motifs, to her designs.3

At the same time, Charles F. Strothoff was proving one of the Bay Area's most prolific architects in the 1920s, responsible for hundreds of Westwood models. Strothoff repeated basic floor plans while adding exterior variations in rooflines, porches, façade materials, and window treatments. Strothoff's broken roof profiles of red clay tile, prominent barrel bays, and fluted stucco columns can be recognized in other neighborhoods, but in Westwood Park and Westwood Highlands there are hundreds of examples.

The 1920 United States census offers an early picture of the kind of people moving into these homes. The tract had close to 450 residents, and the residence park for “the family of average means” introduced a large population of white-collar workers to the area, the most common professions being middle management, sales, and accounting. Westwood Park’s racist deed restrictions banned minority occupation, so only ten percent of the subdivision’s residents were foreign-born and those were of northern-European extraction.4

Of all the firms establishing residence parks in the West of Twin Peaks area, Baldwin & Howell were the most aggressive and canny in promotion. The firm commissioned a short film on the tract's virtues and progress, featuring a time-lapse sequence of one bungalow's construction from framing to ivy-covered completion. There were weekly ads with lavish testimonials from planners, city officials, and happy homemakers—although they could go a bit over the top. Language from one ad in a 1923 issue of The Home Designer magazine reads more as a political manifesto: "We believe that the American home is the bulwark of the Nation and its mightiest safeguard against the revolutionary tendencies that fain would undermine its greatness. We see in the home the gateway to independence, the moulder of sturdy character and the source of true patriotism."5 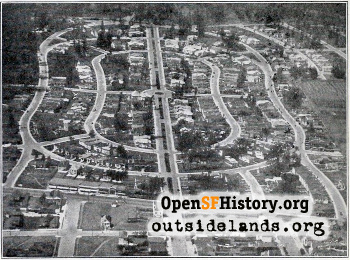 Buying in Westwood Park was apparently even curative because, as the company once proclaimed "young married people find that the sunshine and fresh air take the place of medicines for their children..."6

One of the purported virtues of residence parks was the banishment of commercial buildings and operations. The separation of living space from objectionable and unhealthy enterprises like butcheries, paint shops, and saloons sounded appealing, but posed a problem in the days when an automobile was a luxury and most people shopped for necessities in their neighborhood. The developers of Forest Hill deeded a few lots near the Laguna Honda Station for a small commercial strip. West Portal Park and St. Francis Wood designated West Portal Avenue as a shopping corridor. At the time of Westwood Park's creation, Ocean Avenue had more saloons than anything else, and Baldwin & Howell tried to address this disreputable atmosphere quickly. Lots fronting Ocean Avenue were transformed into storefronts and a small movie theatre. The company advertised the strip as the "Westwood District," apparently hoping not to be associated with the rough and tumble Ingleside neighborhood across the street. The jewel of the strip, originally a Tudor-style sweet shop and tearoom, operates today as "Java on Ocean" café.

Even with an eastern addition to the tract, Westwood Park completely sold out by 1925.7 Baldwin's experiment proved a success, and lessons learned from the development would be employed in a new residential tract created by Baldwin & Howell. Originally naming the street plan north of Monterey Boulevard "Woodcrest," the company hoped to continue their magic run by rechristening the new neighborhood "Westwood Highlands."