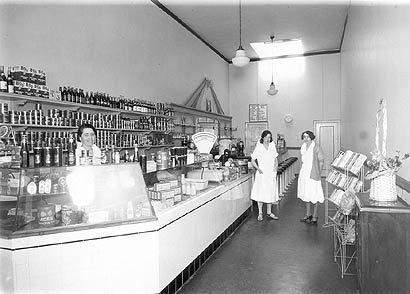 Bob Burness was kind enough to share this photo and some memories:

"This is a picture of the West Portal Creamery, which my Mother (the lady at the left in the photo) opened at 118 West Portal Avenue late in 1930. (Not a very smart move I might add.) She added a lot of groceries and canned goods in later years at the right. There was a lunch counter in the back that you can see.

"One of her steady customers was Carol Channing, the actress who was a schoolgirl then. Carol's father was a Christian Science practitioner who later became the President of the Mother Church in Boston, MA. I have tried many times to enlarge the menu and prices posted on the back wall but cannot. Next door was the Daylight Market as I recall run by the Delucchi brothers in the produce and the Buchinani brothers were the butchers. On the other side were Doug Shaw's Candy and Hobbs Jeweler. The Woolworth's store was built some years later. [Today a Rite-Aid.]

"I remember during the Great Depression the people who lived in St. Francis Wood coming in to beg my Mother to give them something to eat because they had lost everything. Some even tried to have her open a loaf of bread to buy a few slices, since they couldn't afford a full loaf (which I think was about a dime). She was offered a number of houses in St. Francis Wood for about $5000. Of course we didn't have anything like that, but it showed how desperate people were then.

"After about 5 years my Mother's health wouldn't let her keep up the store and she sold it to a Swiss fellow named Bill and it was Bill's Delicatessen until recent years."