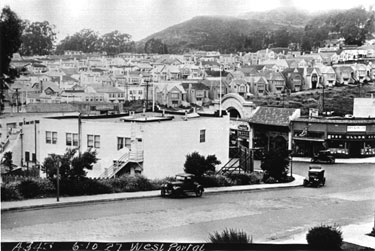 The West Portal tract was the last section of the old Rancho San Miguel to be developed. Consisting of 49 acres at the mouth of the Twin Peaks tunnel, it was used to stage construction equipment for the tunnel and was held in reserve for a streetcar right-of-way to the Parkside (L line) and out Sloat Boulevard (K and M lines). (1)