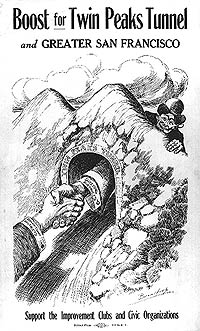 Welcome to the "virtual" version of the West Portal History Walk, a self-guided historical tour along West Portal Avenue. With support from the California Council for the Humanities, participation from the merchants of West Portal Avenue and a great deal of work by Richard Brandi, the walk debuted in storefront windows on February 1, 2002.

Richard is a West Portal resident and fourth-generation San Franciscan who dug through historical collections for representative images and wrote this brief history of the neighborhood.

Surrounding the West Portal neighborhood are the unique urban developments of Forest Hill, St. Francis Wood, Balboa Terrace, and other "residential parks" that were designed with prohibitions on commercial use. West Portal Avenue acted as the commercial strip serving these neighborhoods.

This almost complete separation of commercial and residential districts later became commonplace with the advent of true suburbs after World War II. In the setting of a major city, and with neighborhoods whose very existence was owed to the construction of mass transportation (the Twin Peaks streetcar tunnel), this balanced relationship between developments is historically significant.

We hope you enjoy yourself on this trip to one western neighborhood's past!


Index of the walk:

Image: Poster of the downtown and outlying districts shaking hand through the Twin Peaks Tunnel. Courtesy of the California Historical Society.