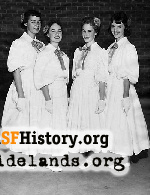 In February of 1965 St. Thomas the Apostle Parish put on a musical/variety show dedicated to Pastor Monsignor Stephen Barron who celebrated his 50th anniversary in the priesthood that year. He was ordained in San Francisco at St. Mary's Cathedral on June 15, 1915.

The show was called, "Young Hearts in Showtime" and was held in the auditorium at George Washington High School.

Students in the Richmond District musical "Young Hearts in Showtime", 1965. -

Members of St. Thomas School Parents' Club devoted untold hours assisting in the production. They were the choreographers, scene directors, and musical directors. They did the scenery (with the kids' help) and the make-up, took care of props and carpenter work, publicity and drafted some outside help where needed. They handled all the numerous jobs necessary for the show.

It was a wonderful community effort with children and adults, public, private and parochial schools working together for one special event. 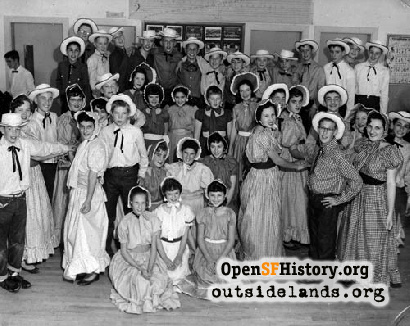