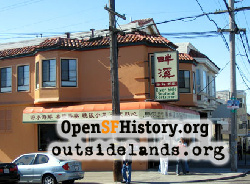 In 2006 a very popular Chinese restaurant, 1201 Vicente street was the site of the Pinelake Market at one time. Here are some memories of Pinelake Market from the WNP message board:

"My mother, Ruth Grant, always shopped here in the 1930s and well into the 1960s. She steadfastly refused to shop at any of the large grocery chains as she always wanted to support the small local independents.

"Your humble writer worked at this grocery in 1942 as a teen ager attending Abraham Lincoln High School. My function was that of stocking shelves. Also, when people phoned in orders it was my function to fill the orders, place them in cardboard boxes, and make the once a day delivery run to various houses in the Parkside District. I had my driver's license less than a year and Mr Scardili, the owner, trusted me with this function; he wasn't sorry. I made $3.00 a day and was happy to get it.

"A short while later, Mr Scardili wrote a very fine letter of recommendation for me which, at least partially, helped me become an Aviation Cadet in the Army Air Corps."
---Frank Grant

"I remember the Pinelake Market because it was my mother's main grocery shopping store. (She used to drag one of those wartime "grocery carts"---a cone shaped peach-basket with wooden wheels---to and from the store.) The grocery was originally on the corner property of 23rd & Vicente. The meat market was next door. At some time during the forties the grocery store had a major fire and I think it was at that time that the two properties merged. There was a passage cut through the wall permitting common access from the inside. Later the corner store was abandoned and the Pinelake Market stayed essentially the same in the adjoining building for many years. I remember that the two owners were named Guido and Cookie, but can't remember the surnames."
---Roy Thomas

"I remember Nello, Guido, and Cookie. I believe Cookie was killed in action in WWll. I lived on 23rd near Vicente. (30's,40's, early 50's) Those were the days when the Parkside was like a small town. The people who owned the neighborhood market were your friends. They came to the weddings and funerals in the neighborhood. When I had my children and would visit my mother, she always took the grandchildren over to the market to say, "hello". Now, with supermarkets you don't know anyone's name. A visit to Pinelake was like a visit to the home of a good friend. As a child, a visit to the meat market always included a free slice of baloney."
---Mimi

Read more Pinelake Market memories (and leave some of your own) on the message board:
Pinelake Meat Market


Contribute your own stories about western neighborhoods places!