What's for breakfast in the Outside Lands, past and present.

Our Moms always said that breakfast was the most important meal of the day, and boy, were they ever right.

In recent months, I’ve often found myself back in San Francisco for work or other day-long outings. On those mornings as I wake up, often at the Ocean Park Motel out by the zoo, the first thing on my mind is coffee and the San Francisco Chronicle. Knowing that I will likely have a full day ahead of me, and not knowing if lunch will be part of my agenda or not, I’m ready for a real meal before I begin the day.

While most establishments offer in-room coffee, and some of the big hotel chains offer a “breakfast bar” of reheated frozen blobs of egg, I tend to seek out real, honest-to-goodness food prepared by a cook working nearby and whose actions I can see. Also, being an early riser when I’m on the road, I’m often out foraging for caffeine and a newspaper by six a.m. However, getting fed in the western part of San Francisco at that early hour can be rather tricky nowadays.

It seems like just a moment ago that Zim’s had more than a dozen outlets all over the City—bright, cheerful places where breakfast was served 24 hours a day, every day of the year, including that longtime location at 19th Avenue and Taraval Street—how many of us dropped in there after the Prom or some other night of revelry? Sadly, after more than 45 years in business, the last Zim’s closed down more than 15 years ago. Foster’s and Manning’s, with both downtown and neighborhood locations, were also great places that once served the early-bird population, but they, too, are also long-gone. 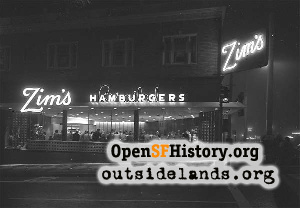 For some time now, I’ve been exploring up and down Taraval, Ocean Avenue, West Portal Avenue, and Judah Street, with some occasional foraging north of Golden Gate Park, and there just does not seem to be much dining activity of any sort in the Western Neighborhoods at that early hour. McDonald’s, all the way over on Ocean Avenue near City College, is open by five a.m., but that’s just not my idea of a cozy or a convenient breakfast spot.

Even if I were to indulge solely in donuts or danish, finding those treats would also be difficult. Our health-conscious society, patrolled by the Federal Food Police, has somehow contributed to the curtailment of many once-popular bakeries. Adeline on West Portal, Baronial on Taraval, Robert’s and Golden Brown on Irving, Wirth Brothers on Geary, and Sugar Bowl on Balboa were once beehives of early morning activity, but are now just fragrant memories of long-gone aromas: cinnamon, chocolate, raspberry, brown sugar, and almond paste. 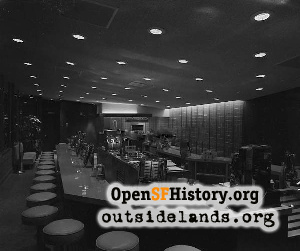 Chains such as Dunkin' Donuts and the like have expanded to fill the gap, and there is also still Schubert’s, a full century old now, and in business for over 70 years at Sixth Avenue and Clement Street, though none of these places seem to be open before seven a.m. Krispy Kreme, an entirely different matter, and ever-present throughout the suburbs, has yet to open an outlet in San Francisco. And whatever long-time 24-hour donut shops may remain in the Tenderloin and near the old Southern Pacific depot site all the way down at Third and Townsend streets are just a tad too far away from the Sunset for easy access.

For such a cosmopolitan city, there are not many 24-hour eateries outside the downtown area, though someone recently told me about an all-night place near 21st Avenue and Geary Boulevard. Upon further examination, that corner, once a Foster’s, is again vacant and sporting a “For Lease” sign. I’m tempted to try the Lucky Penny at Geary and Masonic Avenue, but those who post reviews on Yelp have managed to scare me off.

Likewise, the big-name coffee houses just don’t make it for me, even if they do open in the very early morning hours. Though I can enjoy their sort of ambiance later in the day, armed with a good book or a fully loaded Kindle, there’s something wrong when a breakfast, consisting of a large coffee and a slightly stale scone results in just a handful of change from a $10 bill.

So when I do find a place that’s open by six a.m., I stake my claim. At the Tennessee Grill on Taraval Street at 22nd Avenue, I’m able to sit in the same booth that our family used to occupy on those Sunday mornings when we were headed to the parish picnic or about to leave on vacation. It’s invariably “Coffee and water to start,” and I always decide quickly on what I’d like, rotating among two or three favorite menu items each time. Ketchup, in a red plastic squirt bottle, is my usual side dish of choice.

Surprisingly, the waitress is often the only female in these establishments at that hour. The cooks are invariably male, as are virtually all of the customers until the clock gets past eight or nine a.m. Given the preponderance of women in the working world, including in careers that require travel, one would think that there would be somewhat more of a balance, but it’s just not so. Perhaps women who travel for work rely on in-room coffee to get started, but it’s a different story with guys. In addition, we early-bird breakfasters also tend to be older—I seldom see anyone under 50 when I’m having breakfast out between six and seven a.m. 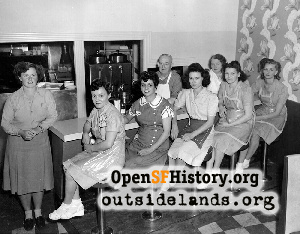 We also tend to follow a proscribed ritual when we are there. Always armed with a fresh newspaper, we glance first at the front page, and then skim over the sports section immediately upon arrival, get into the main news section once the order is placed, and then engage in serious reading of the obits (the Irish sports section), the comics, weather, and Daily Jumble once breakfast is served.

Today, while most of us engage in just a bit of healthy eating (“dry wheat toast, please”), we don’t short-change ourselves on extras such as jam or jelly. Now just what makes any self-respecting food establishment think that anyone would want to put a concoction called “Mixed Fruit Spread” on a perfectly good piece of toast? I’m not aware of any such product sold in grocery stores, so I’ll continue to stick with tried and true tastes like Strawberry or Blackberry, thank you very much.

When the meal is over, we old fogies can be seen cruising through all the sections of the Chron for a second time, over as many cups of coffee each of us can comfortably handle. Given that the tab for restaurant coffee is now well over $2.00 virtually everywhere in San Francisco, it’s a good thing that the owners keep it coming.

Among the regulars, conversations tend to be short and succinct. “Street sweeping today,” one guy mumbled to me, upon hearing the oncoming machinery, thereby helping me to avoid a $40 ticket. One fellow that I used to see there (almost surely one of the last of the male World War II veterans in the neighborhood who is still ambulatory at that hour) saw me skimming through the Chron one morning with my third cup of coffee. “Just not the same since Caen died,” he said, not pausing for any further dialogue. So right he was, oh soooo right, and although that sad event took place 15 years ago, he clearly felt that it was still current news, worthy of comment.

Then, after paying the bill, many of us can be seen leaving, almost caricature-like, with a folded up sports section in a hip pocket and a toothpick hanging jauntily from the lips. In days gone by, a freshly lighted cigarette would have been the final item to accessorize this classic image. 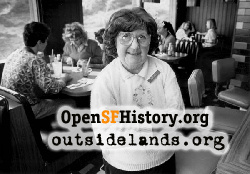 Sometimes venturing north of Golden Gate Park, I’ve discovered that the Seal Rock Inn at 48th and Point Lobos avenues has a small on-site restaurant that opens at six a.m., and in addition to good food and good service, it also offers exceptional views of the entire Lands End area. I was also pleased to see that Louis’, located just above the Cliff House, and now reopened after a lengthy closure for remodeling, has pushed back its opening time from 7:00 a.m. to 6:30—a very good thing for all of us early risers. Now if only they would get rid of that pesky NO CREDIT CARDS policy…

Finally, Mel’s on Geary is another early-open place, and it has a special hold on all of us St. Ignatius alums from Stanyan Street days. It was just a short walk from the school down to Geary, and I can still occupy the same seats by the window facing the parking lot, where my friends and I used to gather. As I sip morning coffee, I recall some of the hilarious, serious, and wonderful discussions that we held with one another so very long ago on those early mornings and late nights when we were finishing up a project for the yearbook or the newspaper. We used to regale each other with stories of Father Spohn’s Physics final, who had been caught drag racing down Wawona, the steamy details of someone’s latest date with that new girl from Presentation, or which liquor stores on outer Taraval were not too thorough in checking IDs. Mel’s became a Pacific Stereo store for many years beginning in the late 1970s, but then reverted to its iconic self once again before the turn of the millennium. On some of these foggy mornings, the events of Spring 1969 play themselves out all over again in my brain, as I sit drinking my coffee and leafing through the Chron.

Now that I’ve staked out three good local places for local early morning eats, it would be great if could once again buy a copy of the Chron for a dime as I walk in, and then fill my car up with gas at 32 cents a gallon on the way home—ah, the past…