This is a brief excerpt from Ken Zinns' "The Tradition Continued: The Sunset District Rowhouse of San Francisco, 1920-1945." Mr. Zinns, now an architect in Oakland, wrote this paper as a student at UC Berkeley in 1983, and has kindly allowed us to make available his work. Here Mr. Zinns focuses on the Gellert and Doelger companies. 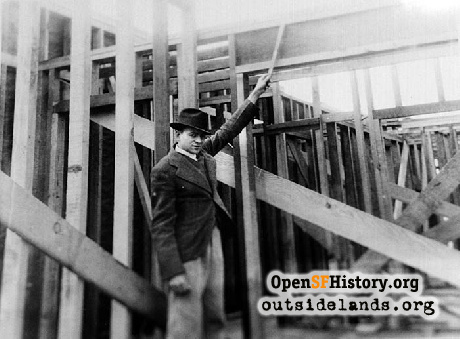 In 1922, Carl and Fred Gellert built their first house in the newly developing Sunset District. These builders helped pioneer the large-scale development of the Sunset, which occurred between 1920 and 1945. The Gellerts and their Standard Building Company (now Sunstream Homes) built about 20,000 dwelling units in San Francisco, most of them small houses in the Sunset.

About the same time as the Gellert Brothers got started, Henry Doelger began his business, Henry Doelger Enterprises. Doelger built about 25,000 houses, again, mostly in the Sunset. Between 1934 and 1941, Doelger was the largest homebuilder in the United States.1 Nicknamed "Doelger City" and the "White Cliffs of Doelger", the area between 27th and 39th Avenues and Kirkham and Quintara Streets was built up, mostly by Doelger, from the late 1920's to the early 1940's. During peak periods such as the late 1930's, the Doelger organization completed homes at the rate of two per day. Other major builders in the Sunset included Ray Galli, Chris McKeon, and the Stoneson Brothers.

The homes produced by these various builders were remarkably similar. Builders borrowed and stole ideas from one another, always keeping track of which floor plans and facade styles were selling best. This was largely a matter of trial and error. With all of the sharing of ideas, it is difficult to identify the builder of many blocks, as their appearances are so similar.

The houses, built generally on identical 25 foot by 120 foot lots, sold for about $5,000 in the 1930's. Henry Doelger, like his competitors, strove to provide a well-built but inexpensive home for the middle-income family. It is not surprising that Doelger was a great admirer of Henry Ford, and in some ways, the Sunset rowhouses were the "Model T's" of housing. Doelger used quality materials, such as redwood framing timbers. The builders of the Sunset made an effort to make their houses affordable to the average family. The Gellerts sold houses to veterans with no down payment, and Doelger sometimes waived payments owed to him on a second mortgage, as a Christmas gift. 2

Doelger's method of design and building was probably typical of the major developers of the Sunset. None of these builders seem to have employed architects to design their houses, although building designers were used. Having chosen a floor plan for a block of twenty houses to be built, Doelger would pin up drawings of twenty street facades along one wall of his office. He would then rearrange and regroup the various styles until he was satisfied with the composition. In this way, a number of different styles were intermixed, giving some variety to the block and imitating the diversity of streetscapes so common in the older parts of San Francisco, when houses were built in small clusters. As the floor plans of all the houses on the block were identical, the only separate drawings needed for each individual house were for the street facade.

The Doelger organization employed separate framing crews for each different house plan, so each crew would be familiar with that one layout, making it unnecessary to spend the time to learn different ones. It was not uncommon for the framing crews to race one another down two sides of one street to see which crew could complete framing their side first. In this way, the development of the Sunset District proceeded at a pace far more rapid than any previous residential development in San Francisco.