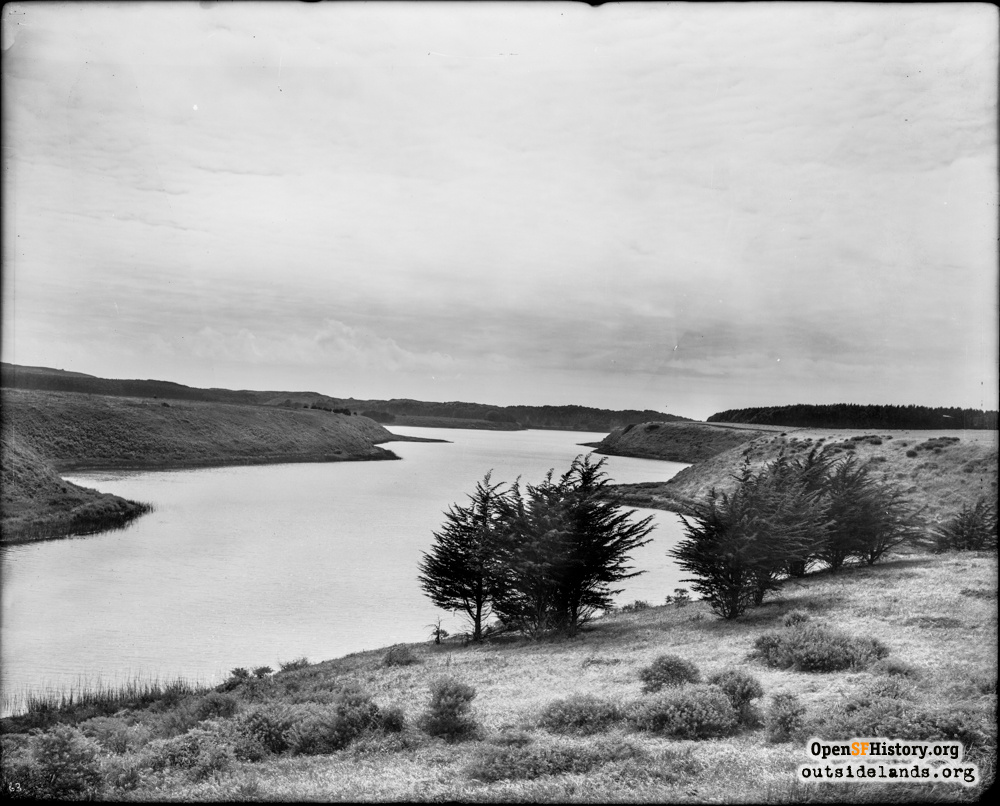 by Woody LaBounty
(Adapted from article published in Outside Lands magazine with support from the Schwemm Family Foundation.)

Since the 1850s, Lake Merced and the land around it have been the site of roadhouses, a famous duel, truck farms, and large scale "city within a city" housing developments. Located in the southwestern corner of the City and County of San Francisco, the lake has been used as a source for the city's water supply and for recreational activities from skeet shooting to golf to dragon boat racing. Despite encroaching urbanization, watershed changes, fragmentation, and aquifer reduction during the twentieth century, the lake remains a unique habitat supporting riparian, dune scrub, and woodland forest natural communities. 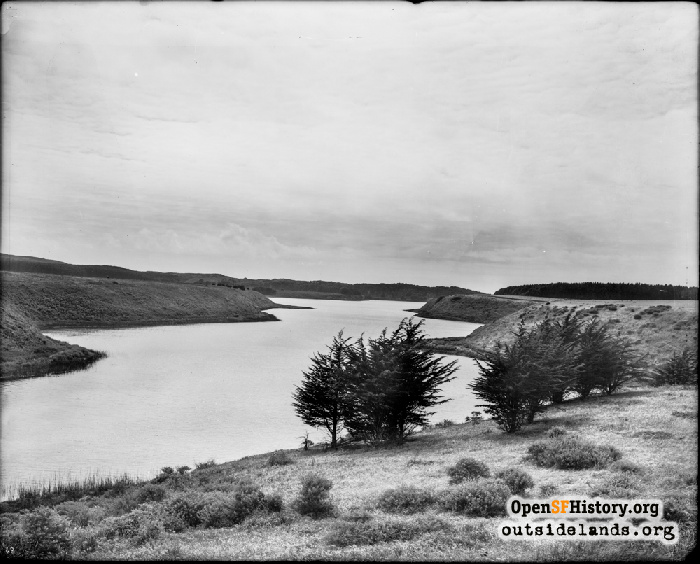 Lake Merced is the largest freshwater lake in the city. Its surface, broken into four connected sections, covers more than 300 acres, and its surrounding watershed is 600 acres. Native peoples had seasonal camps at the lake before the arrival of Europeans, and from shortly after the American occupation of California in the 1840s, it has been a destination for recreation seekers. In 1859, a duel between United States Senator David Broderick and former California Chief Justice David S. Terry took place in a ravine beside the lake, resulting in Broderick's death.

As the largest expanse of wetland habitat in San Francisco, the lake supports an array of sensitive plant and animal species in 395 acres designated by the city as Natural Areas. Because it is the largest freshwater coastal lake and wetland system between the Point Reyes Peninsula in northern Marin County and Pescadero Marsh in southern San Mateo County, the lake offers an important refuge for thousands of migratory birds. As many as fifty avian species—from grebes to herons to barn swallows—use it as a breeding site. Home to many species of native plants and animals, such as dune tansy, California pipevine, and the Western pond turtle, Lake Merced is an important and fragile ecological resource. The native habitat is under threat from urbanization, competition of introduced non-native species, disturbance of soils, alteration of soil nutrients, changes in the watershed, and an overall fragmentation of the lake community.

Tens of thousands of people now live within a short walk of Lake Merced from the surrounding housing developments of Parkmerced, Stonestown, Lakeshore, Country Club Acres, and student housing at San Francisco State University. Many more thousands are planned to arrive with the reconstruction and expansion of the Parkmerced apartment community. At Lake Merced, locals walk, run, bicycle, boat, fish, golf, picnic, bird-watch, and appreciate the natural environment.

About three thousand years ago, what we today know as Lake Merced was a lagoon fed by small streams, groundwater, and a channel to the Pacific Ocean. As recently as the nineteenth century, a tail of the lake wound from the northwest edge, through today’s San Francisco Zoo site, to Ocean Beach. Sand buildup and the migration of coastal dunes cut off this connection to the ocean, but large storms and earthquakes occasionally broke it open. One, in 1852, reportedly dropped the volume of the lake thirty feet. A San Francisco Chronicle reporter wrote “Our informant who left there on Thursday morning stated that the water was still rushing out with great force, and that he had no doubt but that it would soon be emptied.”1 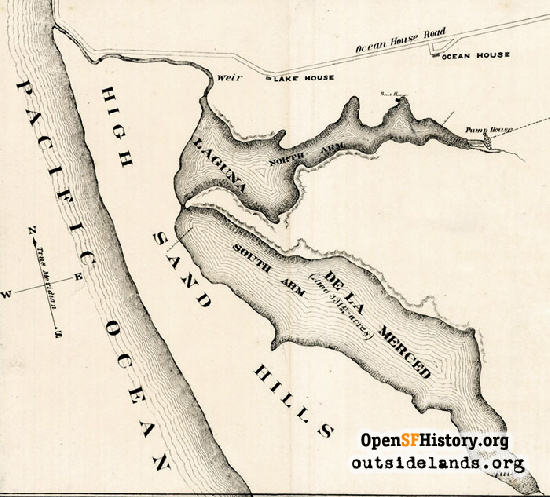 Detail of an 1875 map of Lake Merced by the San Francisco city engineer shows the weir connection to the ocean through today's zoo site., 1875 -

The lake survived, still fed by springs and seeps arising through the sandy soil from a basin of groundwater. Seasonal and underground streams flowed into the lake along the paths now covered by Brotherhood Way, Winston Drive, and Eucalyptus Drive. The barrier separating the lake from the ocean was made permanent in 1895 with a 78-foot long earthen dam installed by the Spring Valley Water Company.

Over the past 150 years, urban development, in-fill, and the re-channeling of stream and storm water have considerably reduced the lake acreage, and depleted the groundwater basin that replenishes it. Into the early twentieth century the lake’s water levels fluctuated due to natural phenomena such as sand drift, severe drought, or unusually rainy years. Average height of the lake’s surface ranged from twelve to twenty-seven feet above sea level. In the 1910s and 1920s, the lake dropped precipitously to just a few feet above sea level because of the diversion of storm water to prevent pollution from nearby agricultural activity and residential development, drought, and increased pumping of groundwater.

The lake surface rebounded in the 1930s, when the City of San Francisco diverted water from Tuolumne River as part of the Hetch Hetchy project, and ranged from 20-25 feet into the 1960s. Increased urbanization around the lake, periodic droughts, and the use of groundwater by nearby golf courses and cemeteries had once more dropped the lake level dramatically by the early 1990s. Community organizations and advocacy groups such as the Committee to Save Lake Merced and Friends of Lake Merced increased public awareness on the decline of water levels. After many public meetings, petitions, and the creation of a task force, agreements were finally reached to supplement the lake level with storm water and reduce the use of well water.

The San Francisco Public Utilities Commission (SFPUC) now attempts to manage the lake in a range of 15-21 feet above sea level, and monitors the water quality and level quarterly. In March 2017, the SFPUC began once more tapping the groundwater basin beneath the lake to supplement the municipal water system.

For thousands of years Yelamu groups of the Ramaytush-speaking people—independent tribes of what are now commonly called the Ohlone Native Americans of Northern California—hunted, fished, and harvested tule reeds from Lake Merced. 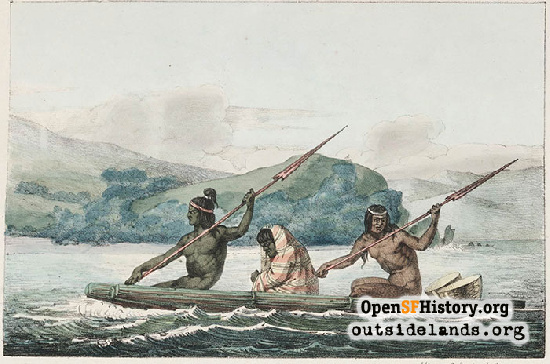 The Ohlone are actually many separate peoples with different cultures, histories, six distinct languages, and numerous dialects, and “Yelamu” likely isn’t what the people who lived on the upper part of the San Francisco peninsula called themselves. The word means “the western people,” and was used by native peoples of the East Bay in describing them.

The Yelamu consisted of about 200 people, which intermarried with neighboring tribes around the Bay Area. The tribe was divided into three or four village groups with each moving seasonally to different sites in its area.2

Physical evidence of pre-colonial Yelamu settlements are mostly found on the protected bay side of the peninsula, but archaeologists have uncovered tools and other signs of Yelamu people on the east side of Lake Merced and on the beach side where Fort Funston is today. (The names “Mitline” and “Opurome,” listed in the registers at Mission Dolores, may be connected with these camps.3) Mussels and the native Olympia oyster were a big part of the local diet when the Yelamu camped in the high coastal dunes west of the lake. The tule reed in the marshes was used to make clothing and boats.4

The arrival of the Spanish in the 1770s would change Ohlone life forever. From a population of more than 10,000 before European colonization, only around a thousand native people lived in the Bay Area at the time of the Gold Rush in 1849—a true decimation in just sixty years. The Ohlone people survived while their identity and culture were repressed and ignored during the takeover of California by the Americans.

Recognition, organization, and recovery of native identity have increased greatly in California since the 1970s. Social, political, and family groups—all very different but tied together by a shared history of local life before the arrival of Europeans—exist today, from the Muwekma Ohlone Tribe of the San Francisco Bay Area to independent scholars, linguists, researchers, and culture bearers.

Spanish expeditions from the south probed the peninsula and the east side of the bay in 1769 (Gaspar de Portola’s, which has been credited with the European discovery of San Francisco Bay), 1770, and 1772. In the fall of 1774, Captain Fernando Rivera y Moncada led an expedition up to what is modern day San Francisco to scout a location for a presidio and mission. The party camped just to the northeast of Lake Merced. A smaller group, sent to reconnoiter the mouth of the Golden Gate, passed a native tule reed raft on Ocean Beach on returning to camp, but didn’t encounter any local people in the area. (On the journey up the peninsula, different native villages welcomed, provided guides, and fed the Spanish.)

Less than two months after the Spanish arrival, the Yelamu were attacked by the Ssalson people, neighbors from the south. The reasons are unknown, although it seems very likely that the arrival of the newcomers factored into the Ssalson's motives. The Yelamu retreated to the East Bay, while the Spanish founded their mission and presidio.

On returning later in 1776, the Yelamu had negative interactions with the colonizers and a skirmish at the end of the year resulted in one Yelamu wounded and another killed by Spanish gunfire. In 1777, religious instruction and the first baptisms of young Yelamu people took place at Mission Dolores. By the end of the year, 32 native people were part of the mission community. Ten years later, the last of the local Yelamu people were baptized and brought into the Mission Dolores complex, joining many converts added from surrounding Bay Area tribes. Traditional uses of Lake Merced by native peoples were probably over by 1800, when the 46 Yelamu people remaining in the area were all recorded in residence at the mission.5

We have no record of what the Yelamu called Lake Merced. A Spanish priest, Father Francisco Palóu, named it La Laguna de Nuestra Señora de la Merced (The Lake of Our Lady of Mercy) in 1775, choosing the name based on the day of the religious calendar that he left the area. By the time of the Gold Rush in 1848, the name had simply become Lake Merced.

This project was made possible with support from the Schwemm Family Foundation.