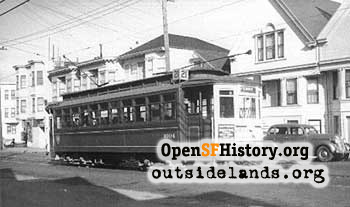 Service begun: As part (the Green Line) of the Market Street Cable Railway on May 26, 1886.

Route: From the Ferry Building to 8th Avenue and Clement, via Market, Hayes, Stanyan, Fulton and 8th Avenue.

From Walter Rice of the Friends of the Cable Car Museum:

"After the 1906 Earthquake and Fire, streetcar service on Hayes Street began in two parts. No. 6 Hayes & Masonic operated on Hayes from Market to Fillmore and the No. 21 Ellis & Hayes ran on Hayes west of Divisadero to Stanyan and Fulton. After the United Railroads of San Francisco lowered Hayes Street between Fillmore and Divisadero (note the street grade is lower than the sidewalks) streetcars could operate on Hayes from Market to Stanyan. Routing was changed. The No. 6 became the Haight & Masonic car line, a new line No. 32 on Hayes ran only as far Fillmore, hence via Fillmore to Oak (return via Page) to Stanyan with rush hour service via the No. 6 to 9th Avenue & Judah. The No. 21 ran from the Ferries to Fulton and later extended (1920s) to 8th Avenue and Clement." 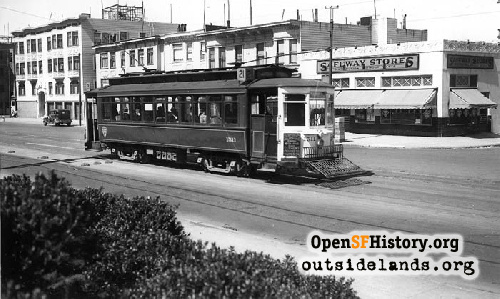