On February 6, 1942 a slide of mud from the southeast side of Mount Davidson hit three homes and killed a woman. 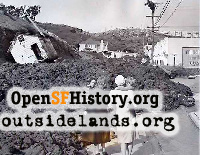 When Foerster Street was cut in the southeast side of Mount Davidson in the 1920s, John Mickelson suddenly found the front door of his house 25 feet above the road. He filled in the gap, but the aggressive roadwork would prove his home's demise. In 1936, during a particularly heavy rainy season, Mickelson's house slid into the street on a pile of mud and was condemned.

Seven years later, amid more wet weather and active construction by the Meyer Brothers company uphill in Miraloma Park, a true disaster came to Foerster Street. On February 6, 1942, a sea of mud fifteen feet deep slid down an embankment swamping the Sunnyside neighborhood.

House on the 700 block of Foerster Street pushed into street by February 6, 1942 landslide. - San Francisco Department of Public Works

Three homes on the 700 block of Foerster Street were knocked off foundations, their contents crushed and strewn in a muddy mess. Rescue teams arrived to search through the rubble and found Doris Kammer trapped in her kitchen. The 64-year-old woman died of her injuries a few days later. 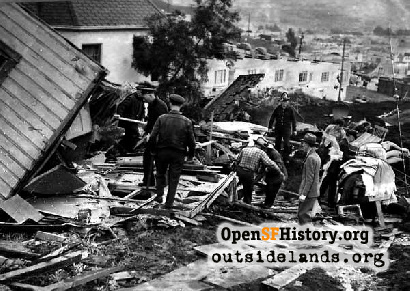