One of the Richmond District's early motion picture theaters. 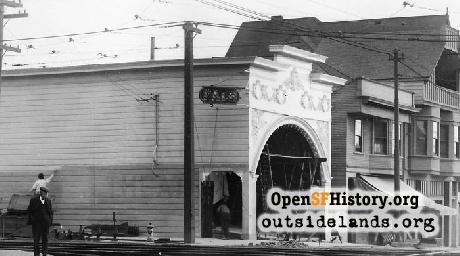 The Palm Theatre was opened by J. Davega as a nickelodeon and penny arcade on the northeast corner of Sixth Avenue and Clement Street on November 9, 1907. The first feature was a version of the "Passion Play."

Davega had opened the Elite Theatre across the street on June 22, 1907, but had to close down for failing the safety requirements of providing two exits. In October 1909, M. Marsh took over the Palm, enlarging and remodeling the theatre, and bringing in new "opera" style seating. As motion pictures grew in popularity, the Palm survived the 1911 erection of the grander Richmond Theater (later called the Lincoln) half a block south on Sixth Avenue, but the imminent arrival of the Coliseum Theater finally convinced the Palm to close its doors in 1918.

Thanks to John Freeman and Jack Tillmany for Palm Theatre history and images.