Coal was king at Geary Boulevard and Fourth Avenue. 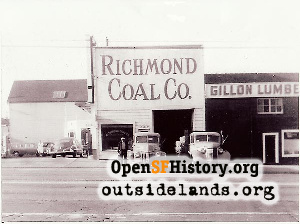 Many Richmond residents remember Gillon Lumber, which until just a few years ago did business on the southeast corner of Fourth Avenue and Geary Boulevard, but how many recall when the Richmond Coal Company stood next door? Thanks to Luigi Damele, who at the Richmond History Day in April 2008 brought us this photograph of John and Louis Damele's shop at 3907 Geary Boulevard.

Into the middle of the 20th Century, coal deliveries (via coal scuttles in the basement) were a part of neighborhood life. Alongside the coal man, the milkman, the ice man (who brought blocks of ice in an era before Frigidaires), and the "rags, bottles, sacks" man---sort of a recycling junk vendor---all traveled residential streets with their wares.