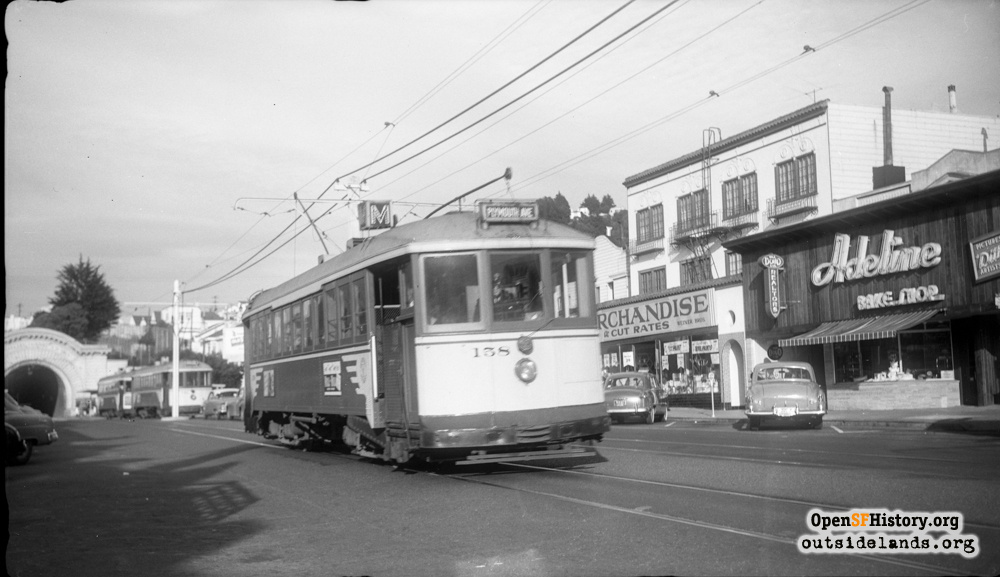 More favorite businesses remembered in the Outside Lands neighborhoods

A few months ago, we looked at some long-gone neighborhood businesses whose owners lived among us. Today we look at even more favorite places, including some owned by people or corporations from beyond "the Avenues."

Adeline Bake Shop—A West Portal fixture (plus downtown locations) for fifty years. Owned by the Lembo family, living nearby on Wawona Street, Adeline had the best Danish pastry in the neighborhood, but their last shop closed in the late 1990s.

Bruce Bary—Stonestown: Owned by Willard Siegel from the Peninsula, the store was a magnet for thousands of high school guys from the 1950s-1970s. Selling button-down collar shirts, wool sweaters and scarves, argyle socks, navy blazers, khaki pants, and saddle shoes, it was packed at back-to-school, Christmas/Hanukkah, and whenever any classic fashion trend would appear. Remember Madras shirts, light-blue pinstripe pants, and Clarks Desert Boots? The store was presided over by dapper salesman Bill Dorsey, who retired in 1979 when the place closed. No plastic credit cards here—just give the name/address of your parents’ account to the nice ladies at the counter, and you were good to go. I still wear my red-and-blue knit scarf every winter, and even with a moth hole or two, it whisks me back instantly to that 1966 St. Ignatius-Lowell Thanksgiving Day football game at Kezar Stadium.

Carriage Market—Northeast corner of 25th Avenue and Noriega Street: Owner Ed Canardo, Millbrae resident, operated one of the last decent-sized independent grocery stores. With separate meat, poultry, and seafood departments, it was a neighborhood fixture for decades until the mid-1990s when the site became yet another Walgreens. Ed catered to customer tastes, stocking the very best in produce, plus canned goods in sizes that were practical for small households. The store still used paper bags (instead of plastic) for fruits and vegetables, had hanging, non-electronic scales, and even took your personal check if you were local, since credit card/ATM readers were never installed. The place was always busy, but in twenty years of living nearby, I never had a problem finding a parking place right in front. 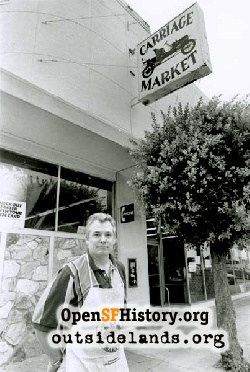 Owner Ed Canardo in front of his Carriage Market at 25th Avenue and Noriega Street, 1995. - Photograph by Philip Liborio Gangi

Chicken Delight—“Don’t cook tonight—call Chicken Delight!” That classic jingle managed to sell hundreds of dinners throughout the western neighborhoods every night from a tiny shop on outer Noriega Street and another at 21st Avenue and Geary Boulevard. Founded in Illinois in 1952 (the same year as Kentucky Fried Chicken/KFC), Chicken Delight grew to over a thousand locations by the early 1960s, easily beating out its rival. Mom and her friends seemed to like this place, and I can recall several satisfying dinners—a bucket of various fried chicken pieces, plus side dishes of coleslaw and blueberry muffins—delivered to our house, particularly on hot or rainy nights, circa 1963-1966. With a large lighted plastic chicken wearing an apron (as kitschy as the Doggie Diner logo) on the roof of delivery cars, word-of-mouth advertising was instantaneous. A late 1960s takeover of the company failed to enforce original quality standards, and many newer outlets failed, thus pulling down the whole chain. A Canadian store owner bought what was left in 1979, and with strong management oversight and rigid quality controls back in place, franchisees now operate successfully, but only in eastern Canada, New York, and New Jersey.

Chuck Wagon—215 West Portal Avenue: Owned by Mr. and Mrs. Buoncristiani from the Marina District. Set back from the street in a garden-like courtyard, it was a quiet, mellow place serving great prime rib. Over the years, it evolved into a number of other restaurants including Bagatelle and Batmale’s. The site is now a real estate office.

Foster's—Lunchroom with dozens of locations (Geary Street, Clement Street, West Portal Avenue, Stonestown, and more). Sandwiches and steam table cuisine were featured, but it was also a bakery with great potato rolls. Gone since 1972, though the name continued on packaged English muffins until 2008.

Gillon Lumber Company—Southeast corner of 4th Avenue and Geary Boulevard: Founded by Edward Gillon in 1896, it was an early local business. Gillon ran it until his death in 1934, when it was taken over by Robert Byard, who operated it for 47 years. In 1981, his grandson Brandon Smith took over. The final owners were Sophia Abuda and family, from 1992-2002. They closed it, citing the usual problems of discount stores, changing customer base, and difficult parking. Gillon outlasted its Sunset District competitors, including White Lumber Company at 22nd Avenue and Noriega Street (closed early 1980s) and Koenig Lumber at 22nd Avenue and Judah Street (closed early 1990s). 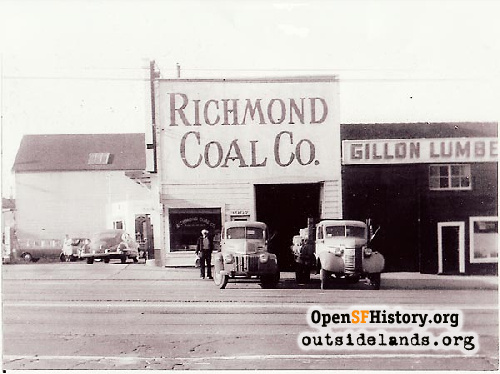 Gold Mirror—Northwest corner of 18th Avenue and Taraval Street: This one-time Fillmore Street bar came to Taraval in the early 1950s, and began serving Italian meals. Good food, good drinks, pleasant surroundings, and the same owners since 1969. A runaway truck almost did the place in, but it’s back better than ever, in spite of the San Francisco Chronicle’s snide remark about the lunch crowd being "the born-and-raised-soon-headed-for-Colma."

Herman's Delicatessen—Geary Boulevard near 7th Avenue: The holy grail of deli food was owned by Herman Voss from Millbrae. The fragrant aroma of all those sausages, cheeses, sliced deli meats, salami, and mayonnaise-based salads (potato, macaroni, coleslaw), plus 3-bean, carrot, and others, along with freshly baked breads and rolls, and the pungent aromas of various types of mustard, plus a barrel of pickles, relishes, and marinated veggies combined to form a unique, appetizing scent. Sadly, the place has been gone for decades, with only the dark blue ceramic tiles on the lower part of the front wall and a single row of Mission-style roof tiles to mark the spot.

Johnson's Tamale Grotto—Vicente Street near 24th Avenue: Originally in the Mission District, a Parkside branch was opened after World War II and thrived until the mid-1970s. Mom used to send Dad with an empty Pyrex dish, which would be filled, then wrapped in foil and layers of newspaper to keep it hot on the ride home. When I was first living in Parkmerced, circa 1976-77, I took my own Pyrex dish there one rainy night, only to find that the place had just gone out of business.

Joseph Magnin—Several locations, including Stonestown: Established in 1913 by the son of I. Magnin’s founder, JM featured clothing for younger women, particularly post-World War II. With an early Stonestown location, the firm prospered, and in 1968, a larger, stand-alone store was built next to the Emporium and opposite the Medical Building. Changing fortunes brought about the chain’s closure in 1984.

King Kold Ice Cream—234 West Portal Avenue: All their flavors just seemed richer and tastier than most. The old-time, high-ceilinged, vanilla-scented store closed just before the 1960s arrival of nearby Baskin-Robbins.

Luzern Restaurant—Noriega Street, between 21st and 22nd Avenues: Quiet little place owned by Rolf & Louise Tschudi, who lived at 15th Avenue and Santiago Street. Featuring French-Swiss cuisine, every meal started with a cup of watercress soup and a butter lettuce salad, and concluded with dessert and coffee. The place had a wonderful 25-year run from the 1970s until the late 1990s when the owners retired.

Maxwell Window Shade—I was afraid that one of the last places in San Francisco to buy basic window shades was another long-gone business when I saw the 15th Avenue and Irving Street storefront empty last year. The good news is that the firm, founded by James and Felicity Maxwell 85 years ago, is thriving under the leadership of their 50-year-old grandson who moved to business to outer Judah Street.

Parkside Paint Store—Southwest corner of 21st Avenue and Taraval Street: One of Dad’s favorite places to hang out and chat. In the early 1960s, Mom tried buying a couple of gallons of pink paint for Dad to use on their bedroom, and apparently the owner felt that the color was too bright, and insisted that Dad come in himself to approve—can you imagine the lawsuit if anyone did something like that today? Mom never cared for the place after that, but she got the shade of pink she wanted. The store is long-gone, and has been through a variety of incarnations as a bread bakery/sandwich/coffee shop over the last 30 years. 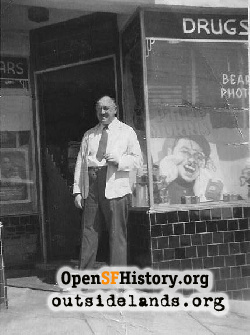 Reis' Pharmacy—Southeast corner of 18th Avenue and Taraval Street: Monroe (Monty) Reis made the daily drive from San Mateo to operate this small neighborhood store along with his brother Charles. Convenient to riders getting off the L-Taraval streetcar at the end of the workday, Reis’ carried all the basics, and from the mid-1930s until about 1970, it was a regular stop for pedestrians, but with sufficient street parking for drivers. In the days prior to home freezers, mail-order drugs, and telephones, many local residents stopped in at Reis’ regularly for a pint of ice cream, a bottle of aspirin, or to make a telephone call. From behind the swinging bar-room doors at the back of the store, the owner had a direct line of sight to the entrance. Once, after a hold-up, a suspect was captured and gave police an exaggerated amount stolen. When the newspapers printed this, an accomplice, still at large, called Mr. Reis to confirm exactly how much had been taken, thinking he had been short-changed by his partner in crime!

Tip-Top Shoe Service—173 West Portal Avenue: Owner Theresa Papa, a stylish, elegantly dressed lady, commuted daily from the Peninsula, and gave her customers excellent service, calling everyone "hon." The shop is still there after a few changes in ownership.

Woolworth's—This classic “dime store” anchored the West Portal shopping district (plus nine other San Francisco locations, including Clement Street and Stonestown). Amid the goldfish, chirping parakeets, cleaning products, potted plants, sewing supplies, candy, cold medicine, and everything else they carried, it was also the place to stock up on school supplies—Pee Chee folders, vinyl-clad binders and binder paper, Schaeffer pens and ink, pencils and extra eraser tips, rulers, spiral notebooks, Elmer’s Glue, and other essentials. I don’t remember Mom spending more than $5 or so for all of my school supplies each year—including the free cigar box from Reis’ Pharmacy to store everything. Combined with Catholic school tuition of just $6 per month per family, my parents managed to score a real bargain! 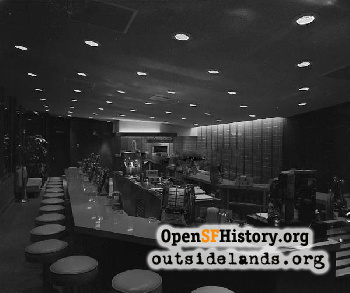 Young Man's Fancy—California Street in Laurel Village: Bruce Bary for the younger set from the end of World War II until the turn of the millennium. You just don’t see many little boys in navy blazers anymore.

Zim's—Southwest corner of 19th Avenue and Taraval Street (and 25 other Bay Area locations): It may have been a chain, but that was no stigma in the 1950s—in fact, it signified consistent high-quality standards. Founded by World War II vet Art Zimmerman, who said that he dreamt of broiled hamburgers and milkshakes while in combat zones, the chain operated successfully from 1948 to 1995, offering classic food, breakfast 24 hours a day, and a clean, welcoming place for late night revelers to regain their bearings. A more upscale "Arthur’s at the Park," located at the southwest corner of 19th Avenue and Lincoln Way, opened to great fanfare circa 1979-80, but never quite took off.