Sutro was a complex man and it's not easy to uncover his motives for buying the rancho, but it doesn't seem to figure prominently in his scheme of things. 11 For example, there's no record of his grazing animals or growing crops. He didn't live on the rancho and did not have a house there. 12 There are no references to his spending time on the property relaxing or entertaining as he did at his Point Lobos home (Sutro Heights).

Other than leasing about 200 acres to farmers, Sutro seems to have used Rancho San Miguel's remaining 1,000 acres as a nature preserve. Soon after buying the rancho, he developed a passion for tree planting that eventually transformed the face of the City and caused an ecological dilemma for later generations.

Teaming up with Joaquin Miller, who started a campaign in 1866 to plant trees on the barren hills surrounding San Francisco, Sutro organized the state's first Arbor Day on November 26, 1886. An elaborate celebration was held on Yerba Buena Island with thousands of children on hand to plant trees donated by Sutro. He threw himself into the details of tree planting to the point of insisting that the traditional date be moved from spring to November, to take advantage of San Francisco's rainy season. 13

Sutro said that day, "...The people of the Pacific Coast... will wander through the majestic groves rising from the trees we are now planting, reverencing the memory of those whose foresight clothed the earth with emerald robes and made nature beautiful to look upon." 14

A panorama of the West Portal area as surveyed by A.S. Baldwin in 1910. The Twin Peaks Tunnel will be dug under this spot in 1914-1917. Dewey Boulevard is the dirt road with telephone poles on the left. Click here or on the photo to see a larger version in a new window. Photo courtesy of the San Francisco History Center, San Francisco Public Library.

The rancho was Sutro's arboretum and plantation. He built a nursery behind the Laguna Honda reservoir at 1000 Clarendon Street where he experimented to see which plants would best hold the sands. 15 George Merritt (who married Sutro's daughter, Emma) reported on June 24, 1889 that "the nursery has 250,000 trees, 50,000 for sale this year according to Flanagan." 16 Alonza Flanagan was superintendent of Rancho San Miguel, having started as a gardener at Sutro's nursery.

Accounts differ about how he planted the trees. Some say he organized school children to plant them. One author repeats a rumor that Sutro "hired large numbers of the city's unemployed by the day, and that they planted the trees too close together, being too lazy to take any extra steps, which accounts for the slender trees and exceeding denseness..." 17 His accounts show that he hired and maintained a staff of nurserymen, gardeners and laborers to tend the forest. 18 He probably used all three methods.

Some claim that Sutro's motivation for planting was to reduce his property taxes. Typical is a comment by a native of the area, Harold Wollenberg, who as a boy played in the Forest: "It was all forest around the Relief Home [now called Laguna Honda Hospital], planted by Adolph Sutro. The forests were encouraged by the city by a 50% reduction in taxes." 19

But tax relief cannot be the only explanation. The costs of building a nursery, importing plants, and hiring dozens of caretakers would more than make up for a reduction in taxes. Sutro's love of nature, his heartfelt philanthropy, and sense of civic betterment also played a role. 20

One present-day rumor can be dismissed. He did not plant eucalyptus as part of a short-lived idea that eucalyptus would become a cash crop. This craze started about 1904, six years after Sutro's death, and had flopped by 1912. 21

The forest turned out to be a curse to Sutro and his heirs. Eucalyptus burns readily, and the danger of fire was a constant worry. Trespassers, who might light a fire for camping or cooking, were a recurring problem. According to the San Francisco Chronicle, "the [Sutro] woods are overrun with picnickers, hunters and tramps." 22

Fires were commonplace. There was a "great" fire on October 8, 1899 and numerous smaller fires every summer. 23 The 1899 fire burned 60 acres and threatened the Affiliated Colleges (today's UCSF) and the Alms House (today's Laguna Honda Hospital) before it was extinguished by 70 firemen and hundreds of volunteers. The steep terrain hindered fire fighting, and "...in one instance five horses were required [instead of the customary three] to pull the engine, and the animals were white with foam and apparently ready to drop in their tracks." 24

To deter trespassers, John Brickwedel, was hired on June 10, 1901 as a ranger. 25 Wollenberg as a young boy used to taut him: "John Brickwedel was the ranger in Sutro Forest. He had a little apple orchard around his house in the forest. He was a gruff, mean guy. We kids used to try and steal apples, and he would come after us with a shotgun. His job was to keep people out of the forest; it was all posted 'No Trespassing.'" 26

In 1909, the estate contracted with the Consolidated Eucalyptus Company to thin out the eucalyptus on Mt. Davidson so that the "remaining trees will do better when they have more air and light." 27 Objections by the Outdoor Art League were dropped when they learned that the forest was not going to be destroyed. In the 1930s, San Francisco boasted its first and only logging plantation in the forest, which employed 435 men. Logging ended in 1934 after a fire burned 10 acres and required 400 firemen to extingush. 28 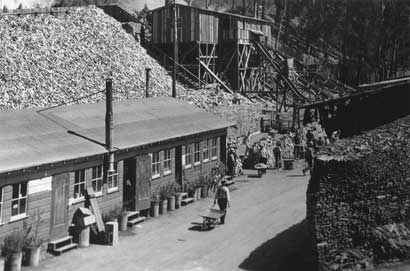 Sutro's tree planting, so self-evidently a good thing in the popular mind of 1886, is now a subject of heated controversy. To some, Sutro will go down in infamy for planting eucalyptus, a tree that they view as a plague for its harmful effects on native species. He planted eucalyptus only to act as a fast growing shelter for smaller trees such as pine, ash and cypress 29 but the eucalyptus grew rapidly and smothered other species. 30

While much of the original forest was cut down to make room for houses, 31 the remainder, behind UCSF, has reached the end of its natural lifespan. Some want the trees left alone, while others prefer that the forest to be thinned and replanted with native species. 32

19. Kortum, ibid pp 74. Quote is from an interview Kortum had with Harold Wollenberg, on March 21, 1994. Harold Wollengerg was born June 1906, his father was Charles Wollenberg, Superintendent of the Alms House (Laguna Honda Hospital) from 1907-1943.

32. "The 58-acre open space reserve on the UCSF campus is gradually being altered as the eucalyptus reach the end of their normal life span and the density of vegetation on the hillside prevents the growth of new trees. Without action to restore the site, the dead and decaying trees increasingly will become a safety hazard to hikers and the site will continue to be overtaken by ivy, blackberry and other invasive species. The campus is studying several options for managing and restoring the site, ranging from maintenance and reforestation with eucalyptus to restoration with native California species," (October 2002 UCSF website).