All the banter about recent violence at San Francisco 49ers games kicked off low grade post-traumatic stress in me, flashing back to the old days at Kezar Stadium, the football team’s original home. There was plenty of violence during the team’s pioneering first years at the stadium in Golden Gate Park, and not all of it on the field.

Those days were captured well in the January 15, 2012 "Native Son" column by the San Francisco Chronicle’s Carl Nolte. He zeroed in on the blue-collar crowds of the early days, rough men who worked on docks and in factories. Not a pencil neck in the lot. Nolte stuck to the pro team’s turf, while my most vivid memories of violence at Kezar was the high school grade, which, looking back, seemed the most dangerous.

I saw the 49ers play in their debut years after World War II and I sold programs during the early 1950s at Kezar, which was a very good deal. I’d make $5 or so and get to see the game for free. Sometimes a fist fight, usually a brief one marked by salvos of beer breath, was thrown in. Never, however, did I see a knife or a combatant have to fight more than one opponent. That is, until I went to a high school football pageant in 1956 when I was fresh out of high school and fresh into Navy blues. 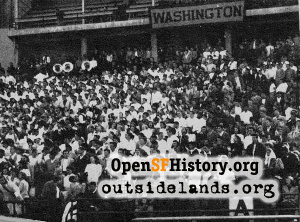 Washington High School section at the 1947 Thanksgiving game against Lowell at Kezar Stadium. -

I saw one guy break away from a pack of others, bound up the stairs into the Saint Ignatius section, swing at what I think was a faculty member, only to end up being tossed prone by S.I. students hand over hand to the apron of the field. I thought it was a good time to leave.

On my way out, a gang of six of so was badgering some boys and girls who also wanted to get out of there. Punches were thrown and one kid with the girls went down, his head hitting the pavement. I retreated to a corner where I picked up a garbage can lid after seeing a knife flash. I used it as a shield to make my way out.

The next day newspapers reported that four youths were stabbed and six “badly beaten.” Police Chief Frank Ahern called for an end to the football pageant, in which each school in the league played just a quarter. I think that was the last year. I don’t recall if the newspapers noted the racial aspects of the fighting, but anyone who was there knew.

The last game at Kezar, which opened in the 1920s and was named for a family that donated money to help build the structure, took place in 1970 when Dallas beat the Niners, 17-10, for the NFC championship. A postgame rampage saw 20 young men toss bottles and cans at the crowd. Thirteen people were treated for cuts and bruises and 22 arrests were made.

I have some good memories of Kezar. I was on the Riordan High football team and we’d sometimes play at Kezar, making you feel proud knowing your cleats were tearing up the same grass as the pros. I guess my finest moment came when I tackled Vallejo High’s Norman Bass, brother of the famous Dick Bass, blindsiding him and knocking him off the field. “Nice tackle,” he said. The contrast with his famous brother, who yelled obscenities when I was lucky enough to bring him down the year before, has stayed with me.

In addition to the off field violence, Nolte noted that the 49ers are the area’s only homegrown professional team. They didn’t come from somewhere else. To me what made the team San Francisco’s “own” was the schools the players on the early teams went to: the programs list Stanford, Cal, USF, St. Mary’s and Santa Clara. 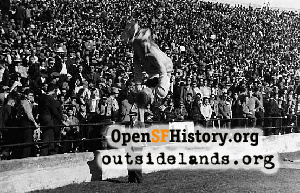 Nolte’s column was my second recent trip to the Nostalgia Bowl. The early one came when I saw the movie “Leatherheads,” the George Clooney comedy about the early days of professional football. The team in the picture looks very much like my dad’s football team from the 1920s, the era depicted in the film.

Both teams wore leather helmets, which is about all they had in common. My father, Pat Clifford, who passed away in 1980, would stress the “semi” when he said his team was “semi-pro.”

“We just split the pot at the end of the season,” he said. “None of us made enough to live off of so we all had jobs.”

Those jobs were in the copper mines of Butte, Montana, a tough town called the “Richest Hill on Earth” that boasted it was a mile high and a mile deep. The team was from the West, not like the movie “Bulldogs” to the East. The geographical difference led me to wonder what professional teams of NFL caliber we had in the San Francisco area before the 49ers were formed in the post war years. The answer is none.

Football fans, however, had plenty of teams to watch. There were college teams, of course, but even high school games were capable of drawing tens of thousands. The Olympic Club fielded a team that was good enough to take on Stanford and USC. There were also some fine military teams in the area. The Mare Island Marines went to the Rose Bowl twice during World War I, beating an army team before losing to Great Lakes Navy.

Dad was a 185-pound guard, a good weight in the days when players had to play offense and defense. Too busy raising a family, he didn’t play ball after moving to San Francisco in the midst of the Depression. He still found time to follow football, and loved the East-West game, which he thought lived up to its billing as “Football’s Finest Hour.” Few people today realize how popular the game was. I remember lining Market Street with thousands of other fans to watch the parade celebrating the contest.

Just before the 49ers came, my father followed the San Francisco Clippers, which belonged to a league made up of teams from up and down the Pacific Coast. He knew some of the players on a first name basis. I remember seeing a poster for a Pacific Coast game that touted Kenny Washington, calling him the great “colored” star. If for nothing else, the league should be remembered for giving Washington, literally, a level playing field.

There were lesser teams with names like the Petaluma Leghorns and South San Francisco Windbreakers.

I once asked my father who was the best player he ever saw.

“I played against him in a scrimmage once and never saw anything like him,” he said. “If he had a hole he was gone.”

Kelly was quarterback for the University of Montana’s single-wing team in the ‘20s in the days when the Grizzles were punching bags for most West Coast teams. Before you snicker, consider the story I was told about Kelly, although I can’t vouch for it.

“Montana played USC and the game was touted as ‘USC vs. Wild Bill Kelly,” dad said. “He promised to score every time USC kicked the ball to him. It only happened once and he scored.”

Kelly, who went on to play pro ball in the East, suddenly collapsed and died while watching a football game in 1931. He was 26.

Kelly’s records included the longest touchdown pass in the East-West game, an 80-yard winning toss in the 1927 game at Kezar to Montana teammate Russ Sweet, who later coached the City College of San Francisco Rams for many years.

The record was nearly broken in the 2007 game in Houston with a 79-yard scoring pass that the Associated Press noted was “eclipsed only by an 80-yarder 80 years ago.” The story, however, did not say it was thrown by “Wild Bill” Kelly.