One of the first graduates of St. Gabriel School Takes a Visit Back.

[Editor's Note: St. Gabriel School is located at 2550 41st Avenue in the San Francisco's Sunset District. At its peak enrollment of 1,200 students in the late 1950s it was the country's largest Catholic parish elementary school west of the Mississippi River.]

The pioneering St. Gabriel’s class of 1952, my class, held a reunion recently that provided a pivotal history lesson for me. I came away thinking that novelist Thomas Wolfe was right about not being able to go home again. In my case, however, I’m not sure I’d want to. 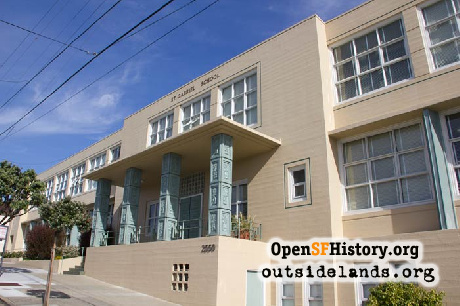 The 14 grads of the Sunset District school had a great time, apparently blissfully unaware that they lacked the “critical thinking skills” needed to succeed in a competitive world. The negative assessment came, in of all places, the latest edition of Gabriel’s Trumpet, a newsletter published by the Catholic school. The article, headlined “Education in the 21st Century,” also said the Class of 1952, the first class to graduate from the school on 41st Avenue, did not have the needed “problem solving” techniques because it learned mainly by rote. Great way to get alums to kick in some money, I thought.

I doubt the Trumpet editors meant any harm. They probably thought most of us were dead by now. Besides, we didn’t have the “critical thinking” skills needed to be offended. They didn’t reckon with one of the first editors of the Trumpet—me.

The Trumpet piece was ignited by a member of the 1952 class who visited the school and was impressed by all the high-tech gear. This led to a trip down memory lane that conjured up the disciplined classrooms of the past where the pen was mightier than the mouse.

One of my fellow classmates recalled that there were 50 students in our class.

“It was a miracle that they could keep control,” one said.

My luncheon partners were Barbara Rozzano, now a Sister of Mercy, and Ann Wiegner Hunt, our class treasurer who went on to teach in some pretty tough public schools in the East Bay.

Both noted that the 8th grade teacher, Sister Mary Aurelia, split the class into different teams that competed in contests such as spelling, math, and history bees. This divide and conquer strategy gave her some degree of control. The Sisters of Mercy also had plenty of parental support. Knowing my parents would learn of any infraction was enough to keep me in line.

Sister Mary Aurelia was very caring, as were most of the sisters. I remembered one who tutored me at the convent an hour before school began. I also had teachers who could have been army sergeants, which was evidenced when the subject of bullying, a big topic in the news today, came up. “Remember how Sister Mary Patrick handled that?” someone asked. After all these years, most of us did. There was hell to pay when she learned that we had been making life miserable for one kid who stuttered and another who, because of a hygiene problem, we dubbed “goober.” I can still see her standing before the class, nearly crying with her fists protruding from her habit in arms encased in what seemed to be long underwear. We never gave the two a hard time after that.

Sister Rozanno cleared up a misconception I held over these many years. I thought most of us repeated 4th grade, the senior class when St. Gabriel opened in an area that was a checkerboard of sand dunes. She explained that some students completed the first semester in public school and the second at the Catholic school. I went to Ulloa Elementary, then a series of barracks-like structures a few blocks from the brand new parochial school, which was state-of-the art, complete with a cafeteria that supplied hot lunches. 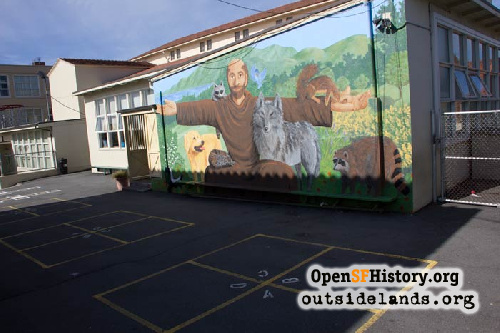 I recall the Ulloa teachers as nice, but not demanding. I can still hear my Dad looking at my Ulloa report card’s grading system and wanting to know what “Satisfactory for this child” meant. At St. Gab’s there were A’s, B’s, etc.

In preparing for the reunion, I searched my attic to find any memorabilia from my St. Gab days. I came up with my block letter from football as well as copies of the first year of the Trumpet, a simple mimeograph job of five pages or so. I was surprised at the quality of the reporting and writing, all by the students. This was really a low-tech era. There were no photos, but a lot of outstanding drawings by Bob Mills, who went on to earn a law degree, become a writer for Bob Hope, and author a book entitled “The Laugh Makers” that recounted his days with the famous comic.

I could be nasty here and say Mills and the rest of us were successful despite not having “critical thinking” skills. On second thought, the Trumpet editor could have meant different thinking skills that were critical in today’s world, not that we couldn’t think critically. We didn’t even have spell-check or calculators.

“What it takes to provide an excellent educational program is very different today than it has ever been in our history,” Alice Lawrie, the St. Gabriel Development Director said in an email. “Our article was meant to highlight the difference in education over the years.”

We really were brought up in a different world. Demographers call my generation, the one stuck between the World War II generation and the Baby Boomers, the “good times” generation. From the economic standpoint, it certainly was. We would grow up to have plenty of jobs awaiting us. The generation behind us was huge and they needed the services of teachers, police officers, fire fighters, car dealers – you name it. Let the good times roll. Hey, gas was cheap.

Also, we were practically all of Irish or Italian stock, coming from families that were mainly practicing Catholics, which was testified by a cookbook from the 1950s that I found in my attic. The book is dedicated to the school nuns and says, “woman’s greatest spheres of influence are the home and the classrooms.” I also found my mother’s PTA card from Ulloa, which lists the PTA as promoting “the welfare of children and youth in home, school, church and community.” Yes, “church.” I wondered what the ACLU would do with that today.

“It is necessary for us to attract students not just from San Francisco, but from all over the Bay Area if we are to survive in this competitive environment.”

One question Lawrie, or anyone at the school, could not answer was this: When did the St. Gab mascot cease to be “The Gaels” and become “The Knights?”

The class of 1952 had voted for the “Galloping Gaels” in order to reflect our Irish heritage as well as our admiration for the St. Mary’s College Gaels. Many of our fathers still talked glowingly about the days when the Moraga school was a football powerhouse.

The old grads at the reunion let out a collective “what?” when I told them about the mascot change. They’d like to know why, when, and by whom? How’s that for critical thinking skills?