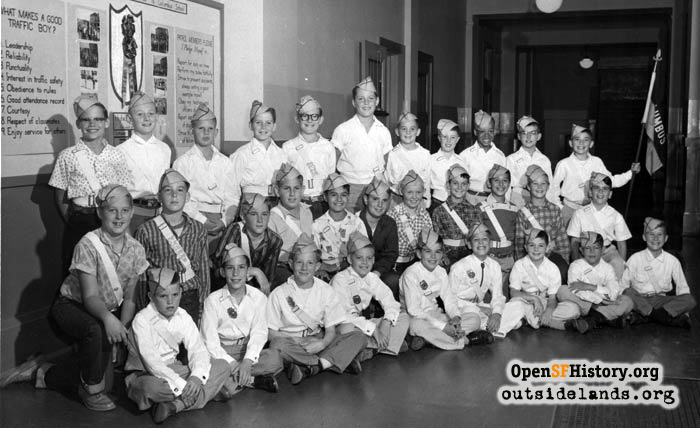 The School Safety Patrol lives on in San Francisco

The San Francisco Chronicle reported recently that Commodore Sloat School has resurrected its School Safety Patrol, with Alice Fong Yu and Lakeshore Schools next in line. While there are now "paid adult supervisors"—don’t ask me what that’s all about—it’s good to see that an important program has returned.

The School Safety Patrol was established in the 1920s by the American Automobile Association in response to a large number of vehicle accidents involving schoolchildren—generally reported in gruesome detail in the newspapers of the era. 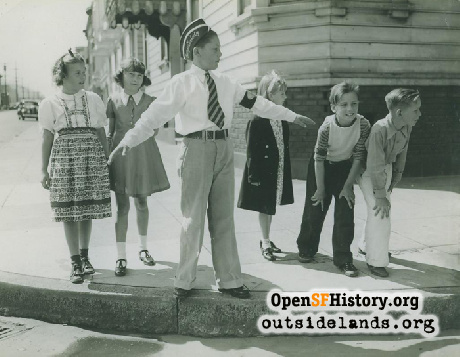 In the past, most students longed for the job from an early age, and the mere threat of exclusion kept many of us in line during our formative years. In recent times, though, the concept of "drive-through" drop-off/pick-up became so commonplace that the program was dropped, thus denying many youngsters an important rite of passage.

Thinking back, most of us breezed through our first dozen years, facing only the challenges of getting out of bed, washing and dressing, scarfing breakfast, and walking to school. Moms and Dads generally did all the heavy lifting, while most of us had relatively carefree childhoods. Along about 6th Grade, however, we began taking on some real responsibilities that impacted others—assignment as a traffic girl or boy.

Once selected, at about age 12, we received on-the-job training from older students who were moving on. In addition to the task of looking out for others, we also learned how schools and workplaces transition over the years, with newcomers filling slots as more experienced people progressed into other activities.

Armed with a yellow-orange cap and a white canvas belt across the chest, the duties were straight-forward—standing at curbside, arm held out horizontally to keep the pedestrians out of the street, and looking both ways to ensure that there was no oncoming traffic. Then, turning and extending the arm 90°, pedestrians would be allowed to cross safely.

There was a ritual to folding the belt and securing the hat within the folds to make a single package. We were told to keep these items clean, and some truly fastidious kids learned ironing at an early age to maintain a crisp image. Those assigned as sergeant, lieutenant, or captain of the squad were also responsible for scheduling, plus filling in for absences. This was perfect training for many who later came to be responsible for staff coverage in high school organizations or at some future employer. Attending the annual review (at Golden Gate Park’s Polo Field in 1964 for me) was a highlight of elementary school days. 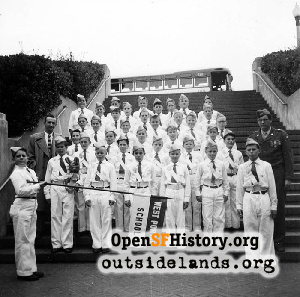 Fond recollections spanning six decades have been posted on the Western Neighborhoods Project message boards—one of the longest-running continuous threads—beginning eleven years ago. Note that while some recall the role as traffic boy, nearly one-third of these comments have come from former traffic girls who served as far back as the 1950s:

Jim, 2003: I was a traffic boy at Commodore Sloat in 1939. It was an honor to be selected… We got to go to school early and stay late. We were issued a hat and a white belt that went across your chest. If it was raining, we wore a yellow raincoat and hat. My post was Junipero Serra [Boulevard] and Ocean [Avenue], which was a busy intersection. We learned safety, responsibility, discipline, and courtesy. It was a good experience and served a great purpose.

Rick, 2003: Officer Plant from SFPD traffic division, whose job it was to oversee all the traffic boy squads in the district, often cruised by in his patrol car. If we saw Officer Plant we would give him a snappy salute and he would return it, which made us feel important. One of the big perks involved free movie passes, good for the Parkside, El Rey, and Empire theaters.

Judy, 2003: I was on the traffic patrol in the mid-1960s. I recently ran across the program from one of the parades at the Polo Field. I felt so proud to be a part of that.

Trevor, 2003: Attending a little private school at 46th and Irving, I was a crossing guard and remember the parade. This was in the mid-seventies and it was at the Polo Fields. All schools were represented—public, Catholic, and some private. Our little school had six crossing guards. Seeing groups of twenty or thirty crossing guards representing one school was daunting. 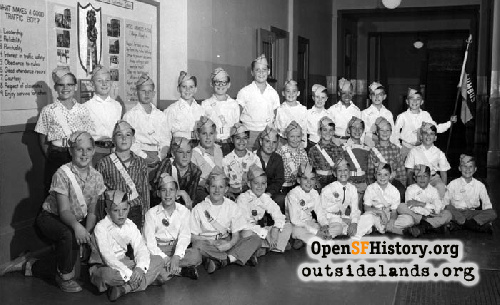 Ron, 2003: I also was a traffic boy, in 1955 at Jefferson. I remember everyone tried to have the stiffest caps—washed with starch.

Leif, 2003: I was on the school traffic patrol at Jefferson in 1951-52. The traffic patrol was only open to boys in the 5th and 6th grade. I still have my yellow cap and white belt. I also have the lieutenant’s badge I wore because I was one of the squad leaders in the 6th grade. The school traffic parade was held at Kezar Stadium in the 1950s. A few weeks before the date, we were released from class for a few afternoons to practice marching. Our instructors were ROTC students from nearby high schools—how we tried to impress them with our marching. Several years later, I had further experience… when I was attending George Washington High School and in the ROTC program, was selected to be one of the marching instructors for a school in the Richmond District.

Alice, 2003: I remember when I was going to Jefferson in the mid-1980s we had traffic boys and girls. I always wanted to be one but my mother wouldn’t let me—too dangerous. They must have done away with the program in the early 1990s. 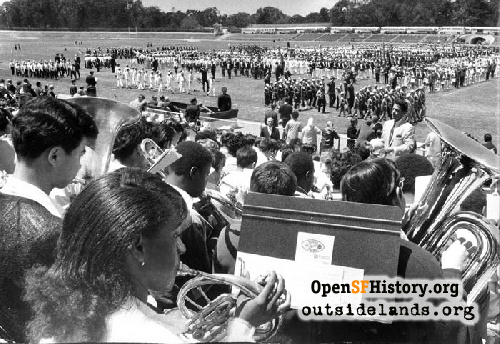 Angus, 2003: I was a traffic boy at Dudley Stone in the Haight. While at AAA on Van Ness, I saw an exhibit of traffic boy paraphernalia in their lobby: white Sam Browne belt, hat with school name, the paddle we used to stop onrushing traffic and the badges: red lieutenant badge and blue captain badge… Good times, though, especially the movie passes.

Dino, 2004: I did the duty at Parkside School in 1961. Hats, cotton belt harnesses and badges… The annual parade was at that time held at the Polo Fields. It did give a kid a pride of responsibility.

Denise, 2004: Girls were not allowed on traffic patrol at Alvarado in the early/mid 1960s. I do, however, remember being allowed to attend the review at Kezar one year. Some of us 6th grade girls got together and convinced our principal, dear Mr. McInnis, that our boys needed cheerleaders. My Mom sewed white gathered skirts for us, and we wore red sweaters, and we went on MUNI.

Louise Ann, 2004: I was a traffic patrol girl at West Portal Lutheran 1968-71. Sloat and 19th got hairy sometimes. We used to have one guy in particular in a 1969 yellow Cadillac Coupe de Ville try and run us over several times… I also remember Officer Plant very well. His son, David, attended our school. Phillip Miller was the Captain of our squad. 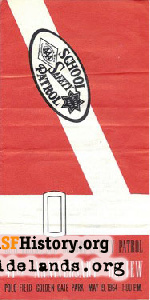 Richard, 2004: I was a traffic boy at Sutro School in 1945. I was amazed to find a picture of the 1945 School Traffic Review at Kezar Stadium… In the picture, uniformed ROTC cadets stand like dark trees among the shorter white-clad traffic boys. Sutro won in our division and I remember walking back along Clement Street.

Norm, 2004: How well I remember that the boys were regularly informed that if we ever strayed from the academic or the moral straight line that we would NEVER get to be traffic boys… We each had our station as these were situated strategically around the school. The status spot (Commodore Sloat/early 1960s) was at Sloat and Ocean on the school side. The stations on Darien Way were too tame, and the southwest corner across from Bowerman’s Drug Store was for the last kid picked to be on the traffic boy squad. It was the “right field” of traffic boy stations… Every so often the cop in charge of all traffic boys would come by, and we would salute. Heck, any cop that came by got a salute. In fact, we saluted anyone in uniform: the guy from the Water Department, the MUNI man of the month, the Tidewater gas station attendant… On rainy days we would get a few more minutes of freedom as we would have to go into the janitor’s area located off the inner school yard to get into our bright yellow rain coats and black rubber buckle-up boots—I can only wonder what the girls were thinking as we boys were standing in the rain and fog as they got into warm cars to go home.

Gary, 2004: I was a traffic boy at Ulloa. Casey Mendell and Tom Larson were captains. I loved the job because I got out of class earlier than others and had all that power when people were crossing the street. I don’t think it had anything to do with my professional career, but I joined the SFPD and retired from there in June 1994.

Ken, 2004: I was a traffic boy at St Paul’s— where we practiced throwing our paddles (semaphores?) into the wooden telephone poles. If you flipped it right, it would stick into the open grain of the old poles. In spite of all our horseplay, no kid we crossed through an intersection ever got hurt on my "watch."

AB, 2007: I remember the show passes. If you did your week of crossing guard work at Jose Ortega Elementary you got a pass good for the El Rey Theater. Great days—and we never lost a kid either!

Irving, 2007: I was a member of the Commodore Sloat Crossing Guard in the mid-70s. They had been defunct for a number of years—I believe it was revived during my 3rd Grade year. 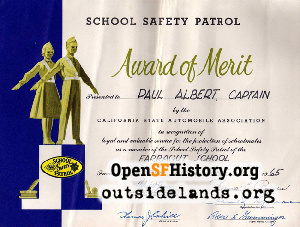 Paul, 2007: I was a traffic guard at Farragut school from 1963-65. I "retired" as a captain… There was a certain way to roll up the white belt that crossed one’s chest and buckled around the waist when it was not being used. The yellow cap was an important part of the gear. The parade was at the Polo Grounds and if I remember right the student marchers from each school wore white shirts but different color sweaters. It was a maturing role that I have never forgotten.

Candis, 2008: I was a traffic girl in Fall 1956 or Spring 1957 at Laguna Honda… The girls had campaigned to be included for some time, and finally the sixth grade girls were allowed their opportunity… Years later, I was part of a token group of the first women hired, and by then I had learned how to handle certain situations.

Heidi, 2009: Isn’t it fun to think back on it all? I was part of Traffic Duty in the 1960s at Parkside. It was thrilling when the police would drive by and salute you! We had what was called “12:30 duty” for the children coming back from lunch. At that time, the Zodiac killer was loose and we all joked about it… but we always did our assigned “12:30” and nothing ever happened.

Myron, 2010: I was a Traffic Boy at Argonne from 1947-1950. I was Captain of the squad and had many privileges such as: handing out rain gear, caps and/or belts (I got first pick of the best or new ones), handing out the weekly “reward” to squad, if they had no demerits—it was good for a free pass to the 4-Star Theater for just the tax, $.03 at that time, got to wear the Captain’s badge, and lastly, got to lead the squad, as school flag bearer, in the annual Safety Parade in Kezar Stadium.

Lorri, 2012: I was a traffic girl at Parkside 1963-64. I was a Lieutenant in H-6th… We didn’t have the power or large STOP signs that traffic people have now. We essentially had to make students stop until there were no cars.

It was one small part of growing up—something that helped us transition from children to civic-minded adult members of the community. 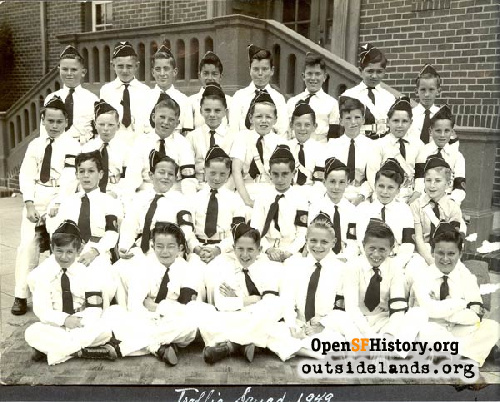