Playland Was Our Adventure 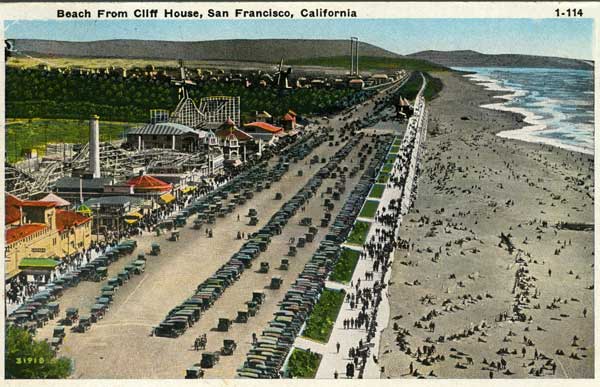 I'm guessing that young families plan a trip to an amusement park down the coast as their adventure.

But for us in the '30s, it was Playland at the Beach. Thinking now about the name, it was meant to breathe magic. What could have been a better moniker for fun, mystery and excitement?

"Laughing Sal" and her ominous beckoning was an invitation and a warning in some unfathomable sense.

"Shoot the Chutes" was such fun because of the splash in the water at the end of the not-so-scary roller coaster ride (far tamer than the "Big Dipper").

The Merry-Go-Round was a place for all ages, including high school dates. And what an apt name for such a marvelous "whirly-gig."

The Penny Arcade was full of opportunities and frustrations. You would have to be Joe DiMaggio or Annie Oakley to score a hit at some of the stands.

My mother told me the story of going to the beach when my dad was transferred to San Francisco. She threw a ball at some animals lined up on a shelf in the rear of the stand and won. The fellow in charge had to give her a huge baby doll, the top prize. My mother said he was sputtering in anger and annoyance and she thought he must have been distracted and failed to "rig the line" so that her target would not have fallen.

That doll became my favorite love for years - her name, of course, was Rose Bud. I must have washed her face and head so many times that they began to disintegrate, with only the beautiful rose bud lips still intact. She had a wonderful mechanism of a weight and balance to open and shut her gorgeous eyes. The doll became so decrepit that it must have been a pain to my mother, but I only saw the original beauty of my favorite doll.

Playland was full of the wonderful aromas of cotton candy and salt water taffy, caramel popcorn and, on the savory side, bull pup tamales. Was it in the pie shop that they served waffles with chocolate syrup and whipped cream? It was incredible - pure decadence.

Over at the Fun House there were tremendous challenges, including running through areas with hidden shots of air and a moveable sidewalk. The "spinning wheel" was like a huge phonograph record and it was mind-boggling until you learned how to stay on by crawling very fast to the center and sitting still (until someone would give you a push and send you propelling off the side). Walking in "the barrel" was another luxury of balance and timing until it sped up and you tumbled and had to crawl to safety.

The huge ceiling-high slides in the Fun House demanded climbing many stairs to get to the top and then pondering whether that long, long ride down was worth it. You had to place yourself on a burlap bag so that your shoes did not touch the surface of the slide and, perhaps, jack-knife you in mid-air.

When I returned to the beach with one of my own children and my dad years later, the Diving Bell (with its up-close view of sea creatures) was the place to go. Staying behind to watch my young child, I watched my father's apprehensive look in the porthole of the bell as they lowered it into the water. All was fine, however, when he emerged to report his tale of adventure and survival.

The beach changed many ways before giving way to condominiums. At the end there were even trampolines located street-level at the corner of Fulton Street.

My favorite place to eat in the "old days" was a rare visit to Topsy's Roost and its excellent fried chicken with hot biscuits and honey. Elegant waiters came down a huge slide with a tray of food they would take to the diners sitting in stylized chicken coops that surrounded a dance floor with a real orchestra.

And sometimes a little girl was allowed to take off her shoes and slide down the wonderful polished slide too.