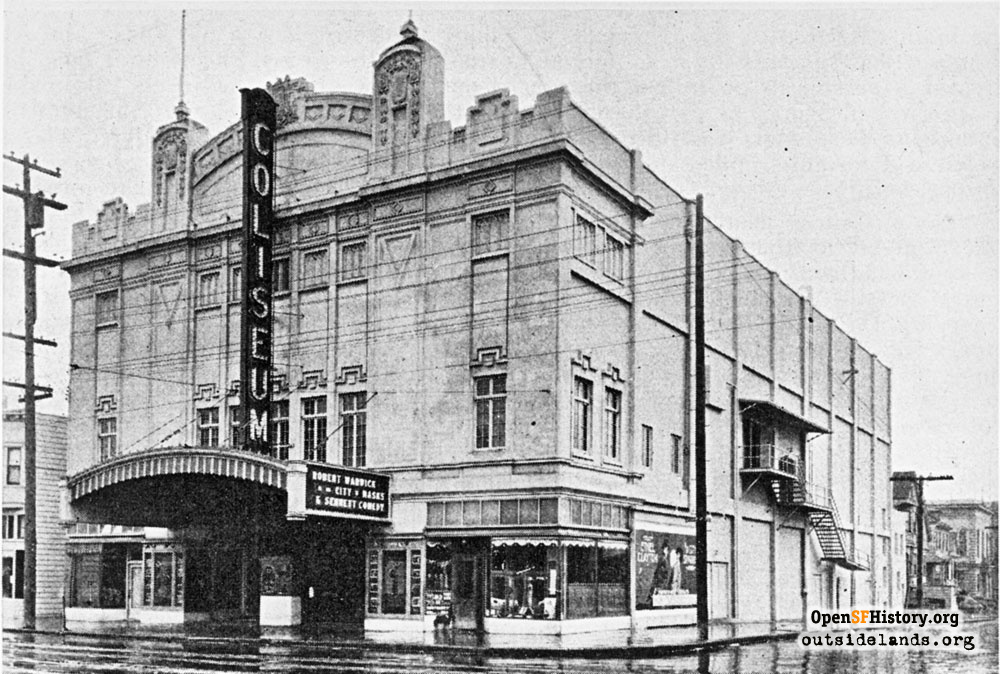 Going to the Saturday matinee movies was the highlight of the week for all the neighborhood kids. 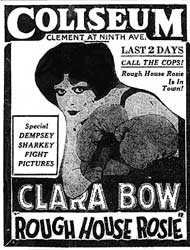 (Originally published in the Richmond Review, May 2001)

Remembering the Coliseum. What a delight!

Going to the Saturday matinee movies was the highlight of the week for all the neighborhood kids. Sure it only cost a dime, but this was the Depression. A dime was hard to come by. Ambitious boys scrubbed stoops for neighbors or swept sidewalks. Girls begged their fathers or made the beds for their siblings to come up with the money. Somehow, some way, each acquired a dime-- 10 cents that opened the treasures of the moviedom universe to fulfill everyone's dreams.

First of all, the preliminary ritual was overwhelming because we had to skate to the Coliseum. We tightened four-year-old skates with a key that was held by a knotted string around the neck. Some girls has strips of sheep's fleece facing their ankles on the top strap. This was a Cadillac touch.

At Ninth and Clement we queued up and sometimes pooled our pennies to go into the fabulous candy store next door, owned by "Nick the Greek." It was as small as a closet and full of every kind of candy imaginable.

We bought "pink and white" capsules of candy-coated licorice doled out ceremoniously from a huge glass apothecary jar and weighed out on an unforgiving scale. Big boys with newspaper routes bought Nick's frozen bananas, which were covered in chocolate, as a teeth-numbing treat.

Going into the Coliseum we went through the main doorway and produced our tickets to a uniformed usher, a high school student looking very militaristic and hired because he fit the suit owned by management. His high school buddies would get in free if he gave them the torn-off stub from someone else's ticket.

If it were a special matinee, there would be an usher on the left as you entered the theater handing out promotional Baby Ruth and Milky Way candy bars or Boston Beans.

Inside, there was always an uproar. Some kids saved seats for others and got into hassles with bigger kids. Some little girls spent the entire time with their hands over their ears with a pained expression because of the noise, made mostly by the boys.

The assistant manager would come out on stage and threaten to not start the movies if anyone threw any more spitballs. Inevitably, some boy with a sling shot would shoot one at him. No one was allowed in the balcony because of such goings-on.

Girls constantly trekked up the thick carpeted stairs to the rest room, where they primped in front of the huge gold-framed mirrors and tried on pale orange-colored Tangee lipstick from a tiny case.

The movies we generally saw were usually in a double-bill with Fox Movietone news reels (with hoots from the restless audience), cartoon (jubilant noises) and serials (with hysterical noise - and lots of opinions and warnings being shouted during the "cliffhanger").

Sometimes the manager would come back on the stage and hold a contest. The whole main floor was packed with kids and he would hold a yelling contest between the boys and girls with the winners getting free admission the next Saturday. Then, there might even be a sing-a-long with a bouncing ball over the words on the screen.

Then, when the movie ended, we would wait for an usher to unlock the skate vault - a closet with hooks on the wall for our skates in exchange for a disk with a number on it. The procedure was so tantalizing some kids skated only one block from the theater to partake in the ceremony.