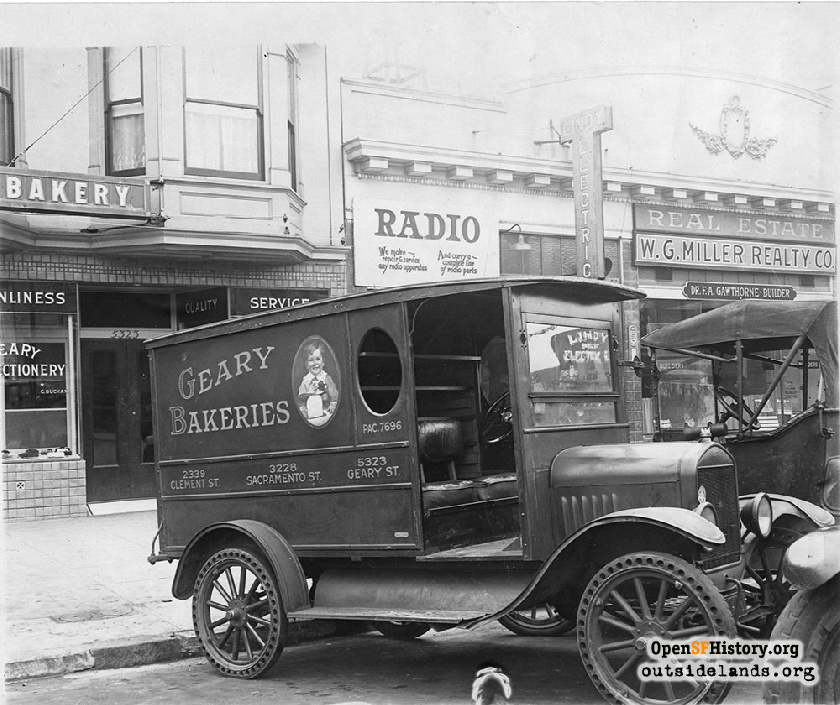 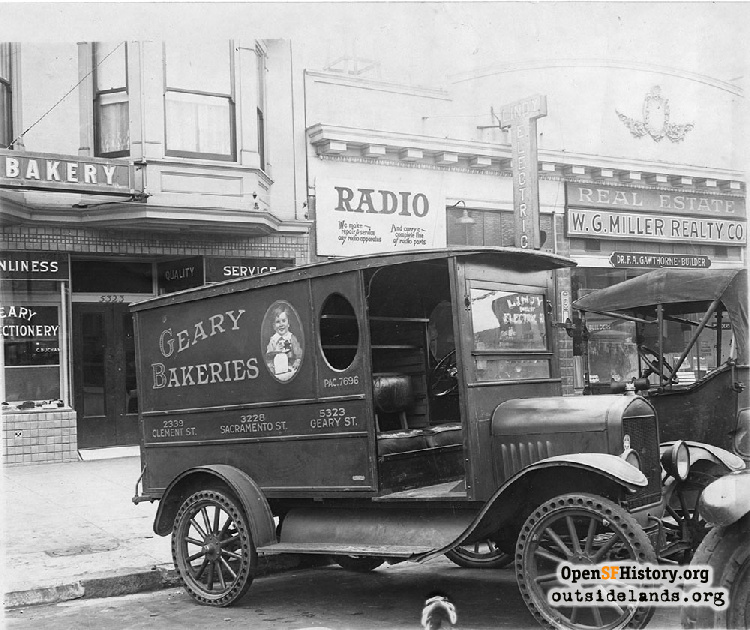 Even neighborhood institutions that seem to have lasted forever can have their predecessors. In the mid 2000s, the venerable Dave Sullivan's Sporting Goods on Geary Boulevard near 17th Avenue closed. The store rambled into a couple of buildings, offering ski equipment, baseball gear, and camping goods for decades. Before Dave Sullivan occupied 5323 Geary in the 1940s, there was Geary Bakeries, shown here in a 1925 photograph courtesy of John Freeman. How do we know it's 1925? John explains:

"I went after the name 'Geary Bakeries' and struck out. That name never made the city directory. I had to work on the other names in the photo background to at least get close before I found the bakery.

"It turns out that Charles Buchan was the baker. He lived with his wife Nina upstairs at 5321 Geary but had a bakery and confectionery shop at 3228 Sacramento Street, between Presidio Avenue and Walnut Street, and another shop at 2339 Clement Street near 23rd Avenue, across from the La Bonita (now 4-Star) Theatre. Sometime in 1925, he took over the store downstairs from where he lived, to have three shops. By 1926, he abandoned the Clement Street shop and only had the Geary and Sacramento Street locations. The truck says 'Geary Bakeries' and lists all three locations.

"Next door at 5327 Geary, was Lindy Electric. I first thought that Lindy was related to Charles 'Lucky Lindy' Lindbergh, the hero of the solo trans-Atlantic flight, but the flight wasn't until 1927. It turns out the electric and radio supply business belonged to Irwin Lindenbaum, who must have gone by the nickname Lindy.

"At 5331 was W. G. Miller, Real Estate Co. with a sign below that read 'Dr. F. A. Gawthorne, Builder.' Those two guys were associated at that address only in 1925. By 1926, F. Arthur Gawthorne's contracting business had moved to 5000 Geary (northwest corner of 14th Avenue) and William G. Miller had branched out into home building."

Update: Ruth Goldstein writes in 2017 that "I knew the Dr. F. A. Gawthorne, Builder you refer to. He was Frederick Arthur Gawthorne, a dentist and an engineer. He was also our landlord in Santa Barbara in the early 1960s. Very old at the time. He died in 1969. He showed me several pictures of himself with Shirley Temple. He was the reason she appeared to never lose a tooth."